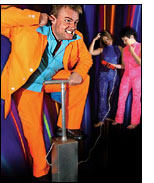 Members, guests and visitors from other clubs filled the meeting room at the Pheasant in Hightown to give Martyn James and Jenny a great welcome. Martyn returned the compliment by giving us a really fantastic evening.

Martyn is successful pro whose comedy illusion act is well known to the magic fraternity. However, tonight the focus of the evening was to be ‘fly out’ acts.

In the first half Martyn performed the 30 minutes of core material from his highly entertaining and stand-up act. The climax of this is a hilarious drinking game effect with a spectator that sees Martyn win and drink all alcoholic prizes whilst leaving the volunteer with orange juices.

During the second half Martyn explained the act and comedy character he was aiming for and gave many tips on solving the problems of performing extended spots abroad. He covered dealing with language barriers, 20kg weight limits. Martyn also explained the ingenious construction of his act, which can be rebuilt in an afternoon from easily obtainable items should he arrive to perform in Spain whilst his case inadvertently continues on to Turkey.

This was a fascinating lecture by a performer who clearly knows the stand-up magic comedy ropes and the pitfalls of working out of a suitcase. Martyn was extremely generous in sharing hard earned experience and expertise but most importantly kept us fully entertained for the whole evening. Lecture notes contained condensates of all Martyn’s ideas plus all you needed to do his drinking game routine. All at a price that anyone could afford.

It almost goes without saying that, for all club secretaries reading this, a Martyn James night is very highly recommended.

Thanks to Martyn James for a great night.