Paul Hallas On Magic And Mentalism 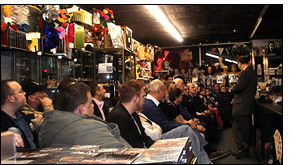 Or if you prefer, PHOMAMAM—Paul Hallas On Magic And Mentalism At Merlins. Whichever our preference, the lecture attracted a full house of some 40 magic enthusiasts, all eager to see this visitor from the USA. It’s unlikely that many, if any, of those attending hadn’t heard of Paul, but if there were any in the group once started speaking, his Yorkshire accent betrayed his origins. Domiciled in the US since 2004, Paul makes a roots pilgrimage every year, taking in the Blackpool Convention and the odd lecture or two. This was the first of two for this visit. Following Merlins, he and his better half, Sherry, were scooting further north over the border to Paisley.

Paul is something of an all rounder, though he does lean towards mentalism. The first half of the session was devoted to magic of the mind, the second, general magic. The mind matter featured Paul’s take on some familiar plots, predictions and divinations and such like, although specific names escape me for the most part. One I could put a handle to was a streamlined Seven Keys to Baldpate, with four keys. Paul has added a prediction and a win-the-contents-of-my-wallet angle. It’s virtually self-working, as long as you remember to set the predictions in the correct envelopes. Having done the trick for years, Paul admitted that he recently made just such an error and forfeited the money. Oh well.

On the general magic front we saw coins, cards, ring on/off rope and even a routine or two with sponges; not spongeballs, but various novelties. An interesting take on Peter Kane’s Jazz Aces caught the attention of the more serious card fans. As did a new card control scheduled to be included in Paul’s next book. Well, Paul said it was original and it was new to me, so it must be.......

There was, by and large something to interest everyone. Perhaps not a specific trick, but lots of hints and tips. For me, the only mistake Paul made was in not having any lecture notes. There was plenty of interest and he would have sold plenty. True enough, all but two items have been published and his books were available and sold well. I have the books, but would cheerfully have bought the notes.

But with or without lecture notes, this was a very good value-for-money session. Well done Mark Lee and Phil Peters, the Merlins Brainstrust, for organising yet another successful event; the inclusion of coffee and biscuits certainly helped keep out the frost. If any club secretary or event coordinator is looking for a solid lecture—this is it.

It’s always interesting to see who turns out for what and there were a couple of local stars in attendance; Richard Morrell, Ken Speckle, Dave Wyton and, all the way from far away Llandudno, Mark Elsdon.