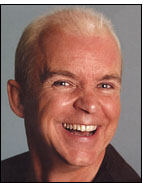 Wayne was introduced by Cynthia Neptune to present the star lecture of the Easter Parade on Saturday afternoon and proceedings began with the presentation of a gift to Wayne and Marianne by the President, Eddie Burke to celebrate their recent wedding in Orlando, Florida. We all wish them the very best for the future.

Wayne’s lecture was a highlight of the Easter Parade. It is great to see how he carries on despite his condition having concentrated on the strong presentation of some very commercial entertainment yet uncomplicated magic. His “Dobson’s Choice” series of booklets is highly recommended.

Wayne began his “talk” as he described it, by a few jokes about his health before moving straight on to his version of the David Hoy “tossed out deck” (“Dobson’s Choice 2 – the Sequel” ) where three spectators each chose a card from a pack secured by elastic bands thrown into the audience. Wayne then proceeded to reveal the identity of the chosen cards in an amusing and entertaining way. His presentation is very strong and an improvement on earlier versions as he deals with each spectator in turn working the audience well for applause using for the last card the theatrical technique of splitting the audience in two, each half attempting to clap and cheer louder than the other. He has some very funny lines such as “It’s rude to ask a lady her age so how much do you weigh?”

Next with the help of a spectator, Wayne showed the card effect “I Swear” (“Dobson’s Choice”) where he asks the spectator to name quietly to him his favourite swear word and sets the pack to spell to the chosen card using this word. Again there was some very funny by play almost appearing to spell the swear word aloud. Wayne is a master of comic timing in his presentations is clear from this and his other effects.

A prediction using bank notes from a wallet based on a Steven Tucker idea was then shown. A very simple method was used but again the presentation is very effective.

Wayne then presented Mick Hanzlick’s “SupaLock” where four keys are shown which do not open a padlock. The master key, which does open it, is then mixed with the others and whichever key is chosen by the spectator will then open it. This is a specially engineered lock made by Mick to a high standard.

A “do as I do” paper tearing routine, which Wayne explained he usually has a young boy from the audience help with, was very funny as the piece of paper handed to the assistant is “no tear” paper available from Practical Magic. Again, the timing of the presentation is crucial.

Wayne finally showed a routine called “Teach A Card Trick” (“Dobson’s Choice 3 – the Final”) where the spectator is invited to play the part of the magician and repeats everything that Wayne says as if performing the trick for Wayne. This uses a beautiful hand-made card box by Colin Rose, which holds a full pack of cards and is available from Wayne. The effect being that the card chosen by Wayne disappears and appears in the card box held by the spectator. Based on a Karrell Fox idea again there is some very funny by play.

Wayne then answered a number of questions from the audience saying that he was hoping to do a few shows with Joe Pasquale and telling a funny story about a visit to the toilet in Las Vegas (you had to be there). He may well put his “Dobson’s Choice” booklets with some other material into a larger book in the future. He also has available a DVD with compilations of his various television appearances.

His favourite magical memories were working the Royal Variety Performance and working in Las Vegas with Englebert Humperdinck. He was also happy to be reminded of his appearance as a 16 year old at the Easter Parade in Harrogate 32 years ago where he performed “cards to pocket” as taught to him by Bruce Vickers of Leicester and caused a sensation.

He was pleased to see some magic back on television again albeit in a different format. When asked if when he discovered he had MS if he thought about giving up he said a resounding no. Magic was like a first medicine and there was nothing wrong with his head! He would carry on whilst he had friends who supported him and he still could.

He promised that the vent routine for which he is so well known would be on the evening show. Finally when asked about his early influences in magic he talked about Ken Brooke and a story of when he met Tommy Cooper in Ken’s Magic Studio.

President, Eddie Burke then thanked Wayne for a first class lecture as one of the top entertainers in the UK and the audience responded with a well-deserved standing ovation.

Wayne’s DTrik range of magic (books, DVD and tricks) is highly recommended and available from him – check out his website at www.waynedobson.co.uk for all the details and more information about Wayne.