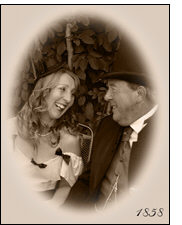 This was a very entertaining and magical show presented within the intimate surroundings of the Fisher Theatre in Bungay. As you entered the theatre the stage was set to the theme of a Victorian parlour with sounds of that era setting the scene. The powerful voice of a Victorian Master of Ceremonies came through the speakers describing those times and to introduce “The Victorian Conjuror”. Chris North a well seasoned professional magician and stage performer entered to good applause dressed as a Victorian gentleman with top hat and tail suit. The magic started immediately with two large white handkerchiefs taken from a display stand magically changing into walking sticks, I loved the gasp from the audience as this happened followed by the applause. A large red handkerchief was now vanished from Chris’s hands and to the audiences surprise appeared back on the display stand along with the white handkerchiefs, this was a great opening to the show and set the magical pace.

Chris really connected with the audience and had them joining in straight away, a ladies finger ring was borrowed and destroyed only later to be found restored within a set of wooden safety security boxes, much to the ladies relief. Chris also presented a classic rising card routine using a very nice wooden houlette and jumbo cards, these cards seemed small by comparison to the giant cards used in a very entertaining find the ace routine later in the show. Chris presented many magical effects from the Victorian era using patter and some effects set to music which added a lovely variety to the show.

Joining Chris at various times during this performance was his very talented wife Belinda, in Victorian dress Belinda presented several routines including a set of pearls that vanished within a small bag to appear once again on a jewellery display stand and a floating silver globe routine set to dreamlike music of that time, Belinda presented and staged these effects extremely well and added a Victorian feminine sensitivity to the show.

Stand out effects and routines in the show included a chilling murder mystery routine, a comical yet amazing escape from shackles, an impossible book test revealing a freely selected word from the works of Dickens that appeared creepily between two Victorian writing slates, these having been held by a member of the audience from the start and a dangerous routine using a metal spike. The metal spike routine is not one that I personally like to watch but in this case the humour Chris added really played well and I felt comfortable watching. There were also various displays of unusual phenomena in the show including a hand bell that rang while suspended from a rope, this being on the command of a supposed deceased school teacher and the amazing finale to the show which was the Victorian Spirit Cabinet. Chris, with Belinda acting as the spiritual conduit, created ghostly and supernatural effects all while Belinda was securely tied to a very high back chair within the spirit cabinet, this was all viewed at close quarters by two gentlemen from the audience. One of these gentlemen received a private seat in the spirit cabinet only to have some very comical attention from the spirits played upon him. The cabinet routine ended spectacularly with a borrowed jacket thrown over and into the cabinet and within seconds the curtains were pulled back revealing Belinda now wearing the jacket while she was still securely tied to the chair.

As an encore one of the smaller members of Chris’s family took to the stage. His youngest son Tomos played the part of a Victorian workhouse boy and witnessed the magical creation of snow. This was a magical finish to a well produced show as Chris, Belinda and Tomos stepped forward to take their well deserved applause.

Steve Majes is "The Tricky Twister" a full time professional magician and expert balloon twister. A Member of The Magic Circle and the actors' union Equity. Currently the holder of the Anglian Magic Society's Close-up Magician of the Year title. www.tricky-twister.co.uk