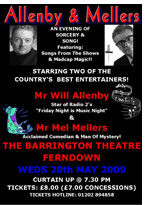 The title certainly aroused my curiosity and on arrival at the Barrington Theatre, Ferndown, being handed the evening's programme by a young lady in naval attire I started to become confused, upon reading said programme "Sail Away with Mellers and Allenby" with its list of "daytime" activities. However, all became apparent. We were "guests" on the liner AMC Paradise Sunset and about to enjoy an evenings entertainment!

The Show commenced with the talented Mel Mellers interacting with the audience. His fast repartee with his chosen "victims" soon had all spellbound and laughing at his quick wit, powers of observation, interaction and magic skills.

Then followed the wonderful baritone voice of Will Allenby whose résumé informed us that he will be performing with the English National Opera at Covent Garden later this year. His larger than life personality bounded on stage in white dinner jacket and he soon had 'the Ferndown Secret Choir' (the audience!) joining him in "Edelweiss" and his other well chosen songs from popular shows. A wonderful talent who at times also accompanied himself on piano.

To bring the first half to a close he was joined on stage by Mel, and the two of them really interacted well together. Following the interval Mel entertained us with his twist on some well worn tricks and once again audience participation and interaction was the key to his success.

Attired in full evening dress, Will Allenby treated the eager audience, in his second spot to a selection of well known classics, notably the 'Music of the Night' from Phantom and a walkabout during "With a Song in My Heart".


The finale saw the introduction of a duet of 'Figaro' with 'Leslie Parrot' (a parrot puppet!) assisted by Mel Mellers with Will doing both voices, truly amazing.

The pair then performed "Musicalepathy" where Will, playing the "Adams Family" theme and suspiciously looking like the late Ali Bongo succeeded in mindreading a song title being thought of by a member of the audience, which he then performed.


This Show definitely deserves a repeat performance to enable all who enjoyed this truly scrumptious treat to tell friends and family, and to achieve a larger audience. Bookers take note, this Show is ideal for any venue from Theatres to Clubs and not just the privilege of the Cruise Liners.