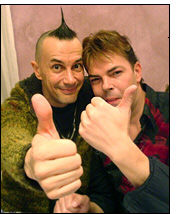 Back to his roots... Turin

Last week I found myself in Italy, and after having spent a couple of nights in Milan, made my way to the automobile capital of Italy (known for the FIAT car company), Turin, or Torino as it is known in Italy. The town itself seems very old – indeed it is, having a history which stretches back to pre-Roman times. In one of the palaces I briefly visited, there were excavations in the basement revealing 6th century B.C. walls and houses. Turin is laid out very systematically with large plaza after large plaza of regal buildings, each with its own characteristic, centred around statues, all very formal. I was lucky that the perimeters of these squares, in fact almost all the streets, are covered, as the weather was rather drizzly. Restaurants, cafés, bars all taking you back in time; waiters and waitresses dressed in smart uniforms, serving you coffee in the finest china; promenades of designer shops and at this time of year the hint of a magical season, just around the corner.

In one of these many squares, Piazza Solferino, can be found the “Teatro Alfieri” where I was able to catch the one man show of Arturo Brachetti – “the man with a thousand faces”. Torino has just over one million inhabitants, and it seemed that every one had turned out to watch this spectacular. Actually I was in Torino on a Tuesday night, traditionally not a night for theatre, however the 2,000 capacity salon was almost completely full; this was the end of the first week that Arturo’s show had been running – I guess the people just kept coming back for more.

The foyer to the theatre was swimming with people of all ages clutching at souvenir programmes, checking out the various pieces of merchandise available – t-shirts, mugs and not to be missed, the excellent quality chapeaugraphy hat brim, similar to that used by Arturo himself in his show. In general there was an excitable buzz in the theatre; I guess this was because Arturo was back on home ground – the people of Turin are rightly proud of their own international star who was born here.

I was lucky that my invitation ticket was in the fourth row from the front, just far away enough to be comfortable without the fear of missing any part of this incredible production.

Until that night I had only seen Arturo on television or on DVD. The experience of watching a live performance cannot be compared to any other media, and the electric from the people of Turin added to the overall effect.

Arturo Brachetti may be known as primarily as a quick change artist, some know him for his magic, but overall he is a very talented actor who grasps you in his hand from the very beginning right until the final curtain. Arturo presents a one and a half hour theatrical production changing costume no less than eighty times. The show also includes the forgotten art of chapeaugraphy (as mentioned above) which is an integral part of the first half of the show which takes place in an attic, where Arturo is reminiscing about his childhood. Arturo’s mother’s hat itself changes in the blink of an eye into many different forms of hat and Arturo with his comical grimaces and ability to imitate introduces us to many characters that are familiar to all. This element of the show had the audience really warmed up; although I did not understand the Italian, the electric in the theatre was prominent.

Also in the first half of the show Arturo reintroduces us to the art of shadowgraphy, or the Chinese shadows as he refers to them. Again performed with lightning skill, this was full of fun and had everyone laughing with pleasure. I later learnt from Arturo that the shadows are for him one of the hardest parts of the whole show, yet each character, whther human or animal was presented without fault.

For those that yearn for the costume changes, the opening of the show is a whirlwind of metamorphosis that fills the most greedy spectator with satisfaction. In the attic set Arturo plucks at various toys and indeed transforms himself into these very objects. I will not reveal too much, however Arturo even changes sex! I later learnt from Arturo himself that this sequence has been developed after the past seven years since the production first began. The audience experiences immediately that which they have come to witness – without doubt the best quick change artist in the world today.

A little more about the actual stage set itself. The whole construction is contained within three lorries. The curtain opens and we find ourselves in a traditional attic style setting; extremely fairytale, this is most probably actually not an attic, but Arturo’s childhood house in Turin. Every part of the set is made use of, including the piano which transforms into a puppet theatre, lines of washing become the backdrop for the chinese shadows, toys are everywhere, and of course the infamous handbag... The set is reflected in Arturo’s gorgeous website pages, which are well worth a look: www.brachetti.com (I recommend the Flash version for the full experience if you have a fast connection). All of the first part of the show takes place in this open setting which has doors and surprises everywhere! Towards the end of the first half we see the first tranformation of the set into a huge wooden crate; the techniques behind this wonderful set are amazing, aided by a perfect light design which adds greatly to the ambience. Occasionally Arturo presents some fine magic effects too, which were well received by the audience – a true all-round artiste.

The interval saw more and more spectators with chapeaugraphy hats on thier heads (the chapeaugraphy comes in the first part of the show and the interval is an ideal time to grasp a hat if you hadn’t already before the show begins). If you are interested Arturo’s book on the Chinese shadows is also available, but I would imagine it takes hours, weeks, months to perfect the precision that Arturo has mastered.

With great anticipation the curtain for the second half was risen, and again we are presented with the wooden crate. The second half of the show is entitled “From Hollywood to Fellini” and can be broken into two parts. Firstly we see a rapid succession of stars, male, female and even animals from the true great films of Hollywood. Amazing transformations which seem to happen in a split second. One moment Arturo is almost naked, the next he is clothed in some outrageous costume, only to change once again to something less frivolous, and then back to flesh. I really feel sorry for the wardrobe assistant! Timing is the key, and the years of development it has taken to create this perfection are extremely noticeable. The clever use of projection throughout the whole of the production adds to the fun and familiarity of the characters presented.

At the end of the show the audience did not want to let Arturo go of course – a standing ovation was inevitable, and Arturo honoured the applause with costume change after costume change, finally appearing in a fancy bathrobe embroidered with his name on the back (rather like a wrestler!). When the audience had dispersed I was shown to Arturo’s dressing room, congratulated him on an excellent performance, and exchanged a few views. We then continued to a wonderful little restaurant right next to the theatre where Arturo ate a well deserved dinner, and wine was provided to us by the management (I ended up finishing the whole bottle with my manager, as Arturo does not drink!).

The current tour in Italy has now finished and Arturo is heading for Korea. I recommend that this performance be seen live; it is truly a lesson in theatre for any working professional. The southern tour of Italy begins at the end of March. Details can be seen on Arturo’s web pages.

A very big thank you to Arturo, his team and Giselle for an outstanding experience and superb hospitality.