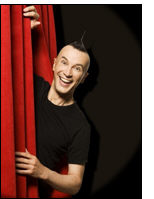 Many magicians will know Arturo Brachetti from the Best of Magic series in 1993 although he first burst on the London theatre scene ten years previously with a show called Y which ran for a year. He is now back in London with his latest show and at the age of 52 is still as lithe and limber as ever.

Although this is a one-man show Brachetti is surrounded by all the technical and computer wizardry of modern theatrical production with revolving sets, sliding trucks, video projection and so on. The lighting is elaborate and the soundtrack a key element in the production. The show starts with a tribute to London and Brachetti rapidly changes from guardsman through punk, pearly, businessman and the Queen to Britannia.

The theme of the show is the old Brachetti looking back at his successes all over the world which he recreates as the young Brachetti. This involves him going from one persona to the other throughout the evening, in some cases rapidly alternating from one to the other in seconds! The basis of the set is a large square cube rather like an enormous wooden packing case with doors and flaps. This revolves and opens to disclose various inner scenes including the Brachetti study with photos and trophies.

There are several long sequences on various themes including a romp through Hollywood favourites including James Bond, King Kong, Bogart & Bacall and, most astonishingly, Gollum. Brachetti in this character, naked but for a loin-cloth, raises a cloth and instantly drops it again to show himself fully clothed in the next character! To enumerate further delights will spoil the surprises but rest assured there are dozens of quick changes plus chapeaugraphy, shadowgraphy and bits of conventional magic along the way.

Criticism? I thought the violin routine with a fake arm a bit corny and, not having seen any of Fellini’s films, that sequence was a bit lost on me, but – hey, this guy is beyond criticism; he is a genuine unique five star copper-bottomed genius.

Change is at the Garrick Theatre until the New Year, with performances daily including Sunday but not on Tuesdays. Running time 1hr 45min including interval.