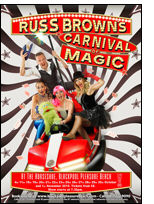 As the lights go down on what looks to be an incredibly well attended opening night, the Carnival of Magic rolls into town. The town in question is Blackpool and the venue is the Horseshoe Theatre at the Blackpool Pleasure Beach. It’s a fitting choice as we soon find ourselves onboard an unpredictable rollercoaster of comedy, magic and illusion with the brakes removed and all levers pushed forward.

Our ride operator goes by the name of Russell Brown and over the next two hours we learn that he is not only a man with big ideas but a big personality to match. No opportunity is wasted and rather than just walking out to greet us, this modern yet nostalgic showman appears magically centre stage with the help of 3 bellboy-esque dancers and a fire eater named Coco who make up the rest of the cast.

The audience is immediately warmed by Russell’s natural charisma and opening patter, but the real charm comes from the fact he’s clearly as excited to be there as we are.

The opening act sees a young girl floating and a nice version of the Modern Art illusion which, having heard him being interviewed I know Mr Steinmeyer himself would highly approve of. The accompanying story being as important as the illusion itself.

An audience member is then brought up on stage to take part in an old scam involving a chain and although it’s our host who walks away with his money, his helper also leaves with a huge smile.

What’s wonderful about this show is the way things are woven together. Leaning heavily on its theme park surroundings each routine is linked with a wheel of fortune type selector that tells us which part of the fairground we are visiting next or some vintage footage projected on either side of the stage. The real star pieces of the first half are undoubtedly an extremely well worked and baffling version of another Steinmeyer creation called Hospitality. Multiple drinks are poured from a simple milk carton and then given out to the audience to try. Russell performs the piece with great enthusiasm and for my money it’s the best version I’ve seen outside of Lance Burton’s show.

The first half closes with gasps as (SPOILER ALERT) an instantly recognisable bright red bumper car is produced right in the middle of the stage.

Following the interval we open with dancing and fire which quickly leads into a recently modern classic, the shrinking head illusion. I’m not a huge fan of the trick myself but tonight it brings gasps and hearty applause from the largely lay audience.

It’s at this point that having been the loudest to shout out how brave they were, my own son was brought up onto the stage. At only 3 and a half years old I was a little worried he would prove difficult to handle but Russell is no first timer and experience shone through along with his genuine affection for his audience. Completely ditching the script he played along with patience and mischief which went over a storm with the crowd. Having climbed through a mirror and had his shoe both burned to a crisp and magically returned (a stunning combination of routining that I refuse to ruin by describing it any further) we had a good 2 hours at home before the adrenaline and excitement wore off and we could get my delighted young boy to bed.


The rest of the second half involved ghost stories and a handkerchief routine that every magician will be Googling after the show. There was a nice UV puppet section and a stretcher illusion fronted by the rest of the cast.

Once the curtains opened again the sight of a drawing pad could mean only one thing and the expected outcome did Kevin James more than proud in its handling. What’s more interesting is what happens next and a combination of that and another effect made the two things greater than the sum of their parts. Again I’ll keep that part vague as the surprise is really worth going to see the show.

As we head toward the finale, the nostalgia which has been beautifully woven through the show reaches its pinnacle and we hear a story about a man and a magic shop with which many of you will be familiar.


The close up finale is met with thunderous applause and there’s just about time for the cast to climb back into a suitcase (not a euphemism) and head down the road to the next town. Thankfully for them they won’t have to travel far as the show is back in the same venue the following week for selected dates throughout October.

I really hope this show gets a break and following some good business appears as a regular feature next season. It’s jam packed with content and will no doubt only get better as the run continues.

There’s plenty here for both lay people and magicians alike. I attended the show with a mixture of family, friends and magicians who all enjoyed everything, even though it was for different reasons. I must conclude with a huge round off applause to Russell who tonight pulled off one of the most ambitious shows I’ve seen in a long time. I can’t wait to see it again in a few weeks.

Details available as Russell Brown’s Carnival of Magic on Facebook and via the Blackpool Pleasure Beach website.