Chris North and his Cavalcade of Wonders
Seagull Theatre, Lowestoft 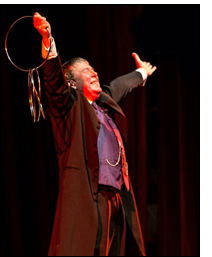 Set in the Victorian era, the scenery depicts a lavish drawing room setting and as the stage lights start to rise, a voiceover, the story teller, reminisces of times gone by and introduces the Victorian Conjuror!


Chris enters the drawing room with a welcoming smile and in full Victorian guise, the playful music kicks in and the ride begins with a magical transposition involving an umbrella and some colourful handkerchiefs, assisted perfectly by his wife and Victorian counterpart Belinda. The fun flow of this opening scene really sets the pace for the show as you realise you are in very safe magical hands. The show is a real feel good family show as Chris and Belinda present magical and amazing effects in a style that leads you along a very baffling and mysterious route, with well themed and light-hearted comical breaks along the way.

I attended the show with a good friend of mine and she made mention of the engaging reactions from the children in the audience as well as magic that she had never seen before. Yes, there was a lot of magic presented that Chris had researched and pulled back into view again from a golden age of Victorian conjuring. From pantomimic presentations that led you down the garden path with surprising results, to interaction with audience members creating a real sense of variety and friendly banter. Chris made objects disappear when you thought you had him sussed, only to have them reappear in surprising places, he made time vanish, passed solid metal through his body, displayed magical puzzles with no obvious workings and had his lovely wife escaping binding ropes in a split second.


There were also plenty of laughs along the way, including a special appearance of a very odd magical couple, Gerry Hatrick and his long suffering partner Gladys. This comedy duo presented magic that didn’t always go to plan, but caused much hilarity in the process!

This show really had everything you could imagine for a magic show, comedy, amazement, mind reading, illusion and a family charm. It’s rare that you get to see a magic show with such a range of entertainment!