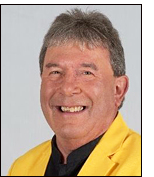 It was President's Night and Chris North graciously agreed to present his very successful comedy mind reading show, after a number of years touring this show Chris was retiring this particular incarnation to focus on a couple of new projects. It was a great turn out of members and guests, even with the World Cup on television and Derren Brown playing to packed houses down the road, Chris still drew a good crowd.

The show had many fun elements with Chris’s humour leading the way, along with many original tweaks and twists to keep even the wisest mentalist in the audience on their toes. Audience participation plays a big part in the show; Chris always makes the spectators feel comfortable, poking more fun at himself on many occasions.

Starting the show with balled up papers thrown to random members of the crowd and having them construct a card between them seemed simple enough, the amazing part was that on unfolding the papers thrown to them the exact card was revealed. Chris now had control of our minds! Next, a group of five spectators took to the stage with a lie detector routine using children’s play blocks, this was a real fun start to the show; of course like the best CSI investigator Chris found the liar.

A jumbo game of Whist was played by two spectators with a well shuffled pack of jumbo cards, even though the cards were shuffled and dealt by a third spectator Chris, well away and out of direct sight from the area, could name the cards they were about to play and predict the winner. Chris mentioned that this skill was taught to him by another mentalist while he was working on the cruise ships.

Next we were taken into the world of the unexplained and slightly spooky with a haunted school bell that would ring while suspended by a string or held very still by a spectator. The story goes that the bell is possessed by an old school teacher, she also made herself known by writing on two blank slates that were being held by a young audience member. Away from the spooks Chris put everything on the line, his wallet, his watch and his wedding ring, which came with a wife, mortgage and house hold bills. The challenge and skill was for Chris to find the right key to open the locked box, with his life in, amongst five other similar looking keys. This was done while his back was turned just by listening to the tinkle of each key as it were tapped against a drinking glass, it was a close call but Chris did save his wallet, watch and marriage!

There were many more challenges to come as Chris did an emotional and fun multiple chair style prediction with three spectators, there was also a drawing duplication of a thought of picture and a heart stopping smash and stab routine where Chris, using his knowledge of body language, just missed impaling himself on a steel spike!

The finale of the show was a truly unexpected and remarkable revelation of a spectator's birth date, revealing a playing card that had been predicted and then their time of birth revealed on a clock that had been frozen in time by removing the batteries, the aforementioned clock had been on stage from the very start of the show. The whole show was a fun journey through some amazing stunts and some very strange happenings, skilfully conducted by a true gentleman of magic.