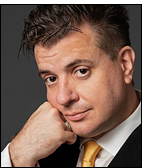 I’m one of 28 people sat in a barn conversion behind a decidedly run-of-the-mill pub on a wet autumn evening in downtown Chippenham: it’s the home of the town’s comedy club, which has opened for one night only. So this is what socially-distanced comedy is like: a real, live, breathing gig. Although having to start at 19.00 on a Thursday to beat the curfew doesn’t look promising, it’s a good room with a very congenial atmosphere. Onstage delivering the above words is the object of our attention, Danny Buckler, whose journey here from his home Guildford is barely covered by the night’s takings; but he welcomes every slender opportunity to perform, feeling the need “to be match-fit for when this madness is over”.

Despite his avowed lack of anything to say, thanks to having been locked down over previous months, Danny proceeds to offer his barrage of rumination, barely drawing breath in his trademark fleet, slightly shouty style. It feels pretty loose, giving the sense it’s all occurring to him right at that moment: the mark of a gifted performer with thirty years of stage time under his belt. In fact he reported afterwards that about 40% is pre-written, the other 60% conjured up on the spot. That’s pretty impressive, if slightly scary for we lesser mortals. He pogoes from Covid to Halloween, magicians, music hall, individual audience members, popular musicals (about which he holds unusually strong views), his largely pointless life, to the burning issue of the day: M&M chocolate bars. In between he shoehorns just three magic routines, straitjacketed to a degree by not being permitted to have spectators onstage next to him.

Before he comes on, in the pause following the two (excellent) local opening acts, I talk to the chap at the next table (the requisite 2 metres away) who is no habitué of comedy clubs, but just fancied a night out featuring live entertainment. I mentioned that the headliner was a magician as well as stand-up, to which he averred, “I can’t stand magicians: they’re so corny”. 50 minutes later, as that headliner exits the stage to warm, enthusiastic applause and cheers that belie there are only 28 people in the room, this chap is a convert: “I hate magicians, but I really rated him. He’s not like a normal magician”. Although, take a moment to dwell on that denunciation of ‘normal magicians’.

For the record Mr Buckler did two card routines and a natty one-coin routine: all very strong. About 15 minutes in he slapped a card back outwards to his forehead, then proceeded to do an extended equivoque sequence with an invisible deck which was peppered with badinage and lines, some taking the rise out of magic and magicians in general, and himself in particular. It was heart-warming to see the response that greeted what you and I would probably dismiss as bog-standard: it slayed them, my temporary companion at the adjoining table actually whooping with delight.

Then he moved on to a nifty one-coin sequence, complete with an all-too-vivid picture of the tacky approach to Davenport’s former shop in Charing Cross Underground; in a way it was reminiscent of Bob Read’s SOH coin routine, whereby the comedy trod the difficult path between overshadowing and underscoring the dexterity on display: appropriate enough, since Bob was born and bred near Chippenham. As witness to Danny’s contrariness, he closed on that dyed-in-the-wool opener, 6 Card Repeat, with delightfully outdated references to Orson Welles, complete with laboured impression of the great man, that only a handful of grey-hairs in the crowd would have recognised; nevertheless they still all chortled along: go figure. It lasted 11 minutes; partly because he kept repeating it very quickly more times than is normal, contentedly scaling the best part of a complete deck by the end; partly because he halted proceedings at numerous points to engage with individuals in the club; partly because he meandered off into fruitful side roads. It was a tour de force, proving to be the perfect closer, complete with applause cue which achieved its required result and then some.

The club owner told me they love Danny Buckler here: he’s headlined at least 5 times over the last couple of years. They regard him as a safe pair of hands, who never repeats himself – the mark of an erstwhile busy cruise ship entertainer who has 5 hours of material at his fingertips. I just wish I could say, “Coming soon to a club near you”: if only.