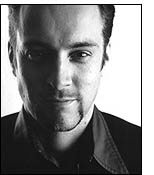 If ever proof were needed that television can warp your perception of a person, Derren Brown's live show is all the evidence you need. On TV he resembles the offspring of Richard Stilgo and Robin Cook - with a shared supercilious smirk.

However, live he is vibrant, witty, charming - and a talented performer.

He has an imaginative and unique approach to his presentation. As an opening sequence, his disembodied voice barks out instructions, with audience volunteers coming and going on an empty stage. They follow his commands, selecting shapes, only to find he has already predicted their choices, demonstrating there are forces of which most people are unaware.

Brown's signature piece is an effect in which he has his volunteer place a £1 coin in either hand - unseen by him. He then reveals which hand the coin is in, based on the person's personality type.

As usual, he offers a £50 note if he made a single error out of five attempts. And this time he did. Not only did he lose the £50, but he was treated to the caution: "You're in Scotland, Derren," by some wag in the audience.

So, now you know, this is not a loose collection of simple magic tricks, and things can go wrong. And that gives the whole performance an edge.

Brown's real talent is for taking a single effect and turning it into a drama that has you on the edge of your seat.

A lesser mind-reader would simply reveal the name, picture or number of which you’re thinking and take their bow.

Brown stretches it to its limit, though at no time does it become tedious or tiring. His sense of timing is perfect and his comic asides at times produce belly laughs. Yet he ensures his volunteers are the stars of the show.

He is incredibly talented at gathering impressions and then revealing them. Somebody thinks of a number or a word, and he can nail it right away.

Best effect? Possibly when he gets everybody in the audience who is listed in the Edinburgh telephone directory to stand. One after the other, audience members are selected and one-by-one, they supply their name. He then tells them their telephone number.

How does he do it? He explains he has researched audience members who paid for their tickets by credit card and cross referenced them with the phone numbers. But how does he explain the fact he knows the addresses and phone numbers of those who paid by cash... and even which page of the phone book their entry appears on?

Brown's pre-show preparation is superb. But while he can manipulate perceptions and thought patterns, he cannot influence the reviewers - as he suggested - to say nothing of the darker, more sinister second half of the show.

The second half is brilliant beyond words... Words which, oddly, escape me.