Derren Brown Mind Reader - An Evening of Wonders.
May 2007
A Review by Mark Elsdon 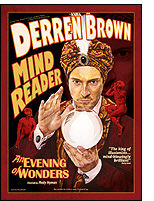 With this, his fourth national theatre tour, Derren once again confirms his status as the UK’s premier wonder worker. Like his previous shows, it was split into two very different halves: the first half consisting of some of the strongest mentalism that you will ever see anywhere, the second being a more theatrical “act”. For the sake of those who are yet to see the show, I will not be outlining each specific effect, but in the context of what I liked and disliked about the show I will offer some examples.

The integration of the hand-held camera from the last tour, as well as a huge projector screen, allowed for a variety of effects that simply would not be possible otherwise. The technology was used wisely, always to amplify the effect rather than accomplish it (with one exception).

In the first half of the show, group readings, bananas, playing cards, boxes of money, mobile phones, banknotes and more were all used to completely fry the audience. One thing that didn’t work for me was his use of the screen to make instant stooges of the whole audience during a playing card mind-reading effect. To me this implies trickery of some kind and the final payoff of this routine was very much diluted as a result. Excellent in this half were a “20 Questions” style routine (a la The Grey Man), and some incredible demonstrations of ‘Change Blindness’. As we have come to expect from Derren (and his cohort Mr Nyman) there are many moments of genius which will have you chuckling in appreciation and wishing that just once, you too could be that clever. The highlight is the absolute best magician-in-trouble type routine that you will ever see. Yes, it’s that good.

One more thing about the first half before we move on: there was an almost complete lack of premise to any of the routines. No explanations, no claims of esoteric skills and almost no justification of how he was doing any of it. And I have to say I approve this bold move. Surely nearly every layman who attends Derren’s shows must already be a dedicated fan, having already seen his series’ and specials and likely a live performance or two. So they already know his premises and claims. When working for his (paying) fans he doesn’t need to repeat what they already know, he simply needs to show them what his skills can accomplish.

The second half was a very mixed bag for me, as well as several laymen friends I chatted to after the show. Firstly, there were some demonstrations of the ideomotor principle and then a floating table. These came across as both disjointed and hurried. Derren’s use of some standard magician’s props (both here and in the first half) stands in stark contrast to his usual role as a champion of no ‘visible compromise’.

Then Derren performed what he described as ‘The Oracle’ act, which was basically a Q & A routine taken to extremes! This part of the show went on far too long and the audience was growing restless as Derren revealed ever more impossible facts about audience members. Even to the non-magicians in the audience there was only one possible way this could have been accomplished.

Up until this point, the second half of the show came across as hugely self-indulgent, lacking the tension and finesse of the ‘theatrical’ second-halves of his two previous shows. Fortunately, the climax of the show reverted to the wow factor of the first half. I won’t table any further details other than to say that it was a great finale with multiple moments of astonishment and some great call-backs which ended the evening on a real high, with Derren performing at full throttle and fully deserving of his standing ovation.

Overall, then, despite my reservations about the second half, it was a thoroughly entertaining show and a pleasure, once again, to watch a master showman at the height of his powers.