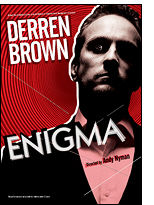 Derren Brown started his new show ENIGMA with four days at the Central Theatre Chatham. I saw the fourth performance and there was no sense that this was a completely new production; it worked as slickly as though it had been running for months.

The show has a more elaborate set than Derren’s previous live shows: solid cut out side pieces with a mélange of letters and designs, wood paneling and heavy velvet curtains and the inevitable video screen at the back. The furniture is heavy and solid and is intended to recreate a Victorian ambiance as, once again, a major portion of the show harks back to the days of spiritualism etc. Although Derren wears a black suit and shirt for the first half, he is clad in white tie and tails for the second.

This current show seemed to have less of a theme running through it than the previous ones and the more disparate items makes it more like the sort of conventional show presented by most mentalists. Whereas in previous shows I have not had a clue as to how any of his effects worked, in this show Derren appeared to use several techniques well-known to anybody who knows the basics of mental magic.

I was pleased to note that there were few coarse gags which I always felt were alien to his rather intellectual image and marred previous shows.

The first half climax is finding an engraved medallion in a ball of wool, in a brandy glass within two wooden boxes. This played big and the audience thought it was terrific but I wondered if it was wise to raise recollections of the old “Coin in a Ball of Wool” from everybody’s childhood magic set?

The second half gets off to a slow start as Derren goes into a pseudo-hypnotist routine and I would wish he could find a way of tightening this up while he weeds out a couple of susceptible subjects. Most of the second half is devoted to a spirit cabinet sequence. As this uses a lady from the audience as a medium, rather than an accomplice, the item played rather slowly and whilst very effective and highly pleasing to the audience could not compete in entertainment value with spirit cabinet acts such as that of Frances Willard & Glen Falkenstein.

The climax of the show is an elaborate routine of seven men arranging themselves in a random fashion which every time is proved not to be random. This is very strong and builds to a great climax which, as is usual in Derren’s shows, binds together everything that has gone before.

This technique, whilst being very effective, makes one realize that everything, every line, every apparent improvisation, every gesture probably, is meticulously rehearsed like a play and that Derren is a superlative actor. But then, we don’t believe all his psycho-babble is true, do we? He is not performing to baffle magicians, he is there to entertain the public, but he provides one object lesson for magicians everywhere – an amateur rehearses until he gets it right, a professional rehearses until he can’t get it wrong. Derren Brown is the best there is.