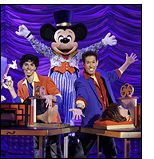 I have to start by saying that this is a "Disney Show" and is aimed at under 10's so is full of saccharine sweet, life-affirming messages, sledge hammer subtleties, relentless cheeriness and day-glow colours that make the Tellytubbies look like they were directed by Quentin Tarantino. If you're looking for a piece of serious drama, realistic portrayals and muted underplaying of beautiful magic then this isn't the show for you. It's also wise to borrow some small children to take with you when you go to see the show as I stuck out like a sore thumb as the lone adult eating popcorn in a crowd of 2000 of kids.

The show is entering its 4th year of a World tour produced by Kenneth Feld (Siegfried & Roy) with ensemble magic sequences by Jim Steinmeyer and is playing a range of venues across the UK until the middle of April.

The show opens with a cute voice-over preshow announcement and then the introduction of our 2 magical leads - the young/hip/fun older brother magician "Brad Ross" (played by Brad Ross) and the kooky/nerdy/underdog magician "Benny Boyle" (confusingly played by Fred Moore) who warm the audience up with some banter, establish the magic words the audience have to use to help the magic happen and then introduce the main show. After the big opening song-n-dance (the only non magic sequence in the whole show) our 2 magicians return to the stage and Brad does KJ's Bowl-o-Rama whilst Benny manages to link 2 rings but cannot unlink them; this establishes Brad as the alpha magician and the rest of the show will be Mickey & Mini helping Benny to believe in himself so that one day he can become a big magician like Brad, after all "...there's a little bit of magic in us all"

An Alice in wonderland sequence opens with a cute sucker effect where the Mad Hatter produces a multitude of object from his hat "accidentally" exposes the effect then goes on to produce even more props in an impossible way culminating in a giant painted silk of the "running late white rabbit" which is then used to produce a 7ft tall rabbit using a very simple method but which produced audible gasps and shock from the audience. Mickey returns to do a giant card trick with Benny's help culminating in a visible (giant) card change to the queen of hearts. Brad turns all the dancing playing cards on stage in to Queen's which enrages the Actual Queen of Hearts who orders "off with his head" leading to Brad being put in a Head & Body Twister that was beautifully presented though was the only prop in the whole show that didn't seem to be decorated to fit in with the scenic themes.

The next act was a nod to Fantasia as a UV sequence with Mickey, Mini and some dancing broomsticks lead in to a nicely themed (but noisy) Steinmeyer Pole Levitation used to float Mini. The effect was rather lost in the overall staging but the choreography used to introduce the prop and get Mini in to position was brilliantly subtle and very well thought out.

A short section front-of curtains enabled Brad to really interact with the audience and bring a boy out of the audience to join him onstage for a Hat Tear which was an odd choice of effect but his routine, adlibs and presentation show it was clearly a sequence he had spent years honing and refining. He even tidied up the stage and turned the trash-can in to a giant bunch of flowers; Eddie Izzard would have been most impressed!

Cinderella's Kitchen was the setting for a rather wasted Million Dollar Mystery sequenced used to produce Cinderella, Snow White, an old Hag and even Prince Charming. Unfortunately the prop was big enough to load a race-horse and was left on stage for the entire 10 min scene with many poor choices of lighting so that by the middle of the sequence the kids sat around me were pointing to something they shouldn't have been able to see and shouting out the method. A Bim-Bam-Box presented by Brad was used to turn an audience members shoes in to Cinderella's Glass slippers before Cinderella magically changed from rags-to-ball gown (and somehow her eye colour as well) in seconds inside a giant Pumpkin.

Another front of curtain sequence saw Donald chicken out of being shot from a cannon and Benny being press-ganged in to taking his place. Squished flat via a wringer, shot from the cannon and re-appearing from a target on the other side of the stage the props and technology used were a little rickety and low tech but again the staging and a wonderful subtlety made it in to a great fun effect that will catch a lot of magicians off guard!

A starry Arabian skyline was the setting for Brad to Levitate "Princess Jasmine" in a traditional presentation of the "Airtime" double levitation, again the staging and ensemble presentation was beautiful though a few technical issues with lighting and sound did distract slightly. Could someone call Walter Blaney maybe?

Front of Curtain again and Brad presented his traditional Sub-Trunk routine using 2 kids from the audience to examine the trunk and act as onstage witness's it was a really fast and very slick presentation that again has clearly been refined over thousands of performances to the extent that it's the sequence they’ve used use to promote the show on other shows. Great fun!

Unfortunately Ariel (the little mermaid) has gone missing so Brad makes her appear in a giant Aquarium which was actually a brilliant and ultimately logical use of a Crystal Casket smoke chamber.

After taking part in so many illusions’ Benny finally finds the magic inside himself and presents a 5 ring linking ring routine that builds in to a silk routine. It's not knuckle-busting magic but it’s a very logical sequence that builds and builds as the character's confidence grows and ended up with the biggest cheer of the night. Now he's a fully fledged magician he joins forces with Brad to present a Double Sawing in Half - using the Doug Henning Routine complete with mis-made-assistants finale and using original Doug Henning props to do it! Finally Benny is locked in a Lions Bride cage by Brad and turned in to Donald Duck..... Brad removes his wig & jacket to reveal he is now Benny & Brad appears at the back of the theatre! Everyone returns to the stage for the big bows as Brad & Benny do a double KJ Snow Animator to shoot glitter out over the audience.

Overall it's a really good fun show and at 90mins long and tickets for £10 it's a bargain; it's by far the biggest and most lavish magic show to tour the UK for 20 years and offers a great chance to see proper "big production" settings for illusions that you just won't find performed anywhere on this side of the Atlantic. On the downside the set & costumes are starting to show their age, the story has gotten lost as the show has evolved and (ironically) the big character illusion sequences don't feel that magical as it seems perfectly logical that Princess Jasmine can actually fly and that the Mad Hatter could keep a 7ft bunny hidden in his hat. On the flipside Brad & Benny manage to cut thru the Disney schmaltz and stamp their own personalities firmly on their sequences whilst keeping it all looking fresh and fun when in reality they must have performed this show several thousand times. It's good, untaxing fun and definitely worth catching as it works its way around the country.