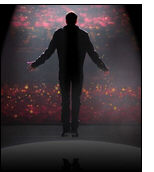 I've just returned from a show that I genuinely wanted to be good. Magic is my career and how it is conveyed is important to me, on television and live, therefore with a profile as high as Dynamos I really wanted this show to be good.

Now if you are a Dynamo fan already you won't be disappointed and if your aren't a fan I still don't think you'll be disappointed. I was pleasantly surprised despite having a pretty good idea about what I'd experience, I predict the future, it's my job (and I'd seen some reviews).

Dynamo is a global star, likeable and totally down to earth. Where many magicians fail is the ability to connect on a normal level with people. There is often a disconnect with many magician performers be it close up or on stage. I've seen many shows and witnessed this first hand, there can be a feel of superiority, lack of personality or sincerity.

Dynamo was that normal kid, with a tough upbringing, finding magic as a way of expression, knocking on endless doors with his manager Dan, doing free gigs to get exposure and having the success we (magicians) can only dream about. It didn't happen overnight, I've known Dynamo (Steven) for over 15 years and have heard the stories of endless TV folk turning himself and Dan Albion away, I've been there, it's horrible, infuriating and demotivating.

What he does well and has done well is to stay true to what he is and was, it's his brand and people love him for it. The most important thing in most walks of life is to be likeable, success can change some people, I've seen it happen even when the success has been only within magic, which really is quite a small world. Dynamo is an A list celebrity, recognised and admired around the world, I had a chance to sit with Dynamo and Dan backstage where we discussed aspects of the show, the risky parts, previous nights in Manchester with a few funny nerve wreaking moments. He has a humility that will serve him well and clearly has. To me he is even more relaxed, likeable and humble than when we've met previously and I'm sure he will always be.

The show is technically demanding in places and I applauded the opening card sequence as it is technically the most difficult thing in the show, if he was off by a split second it wouldn't work, he was however spot on and it worked brilliantly and was by no means easy. There are bits I'd adjust throughout the show but only minor things. Some scripting still needs to settle with Dynamo but as I said his sincerity and natural charm easily compensate for it.

Tonight I watched a young man do really well on stage with a show that people really enjoyed. I can't say to much as I don't want to spoil it but obviously he levitated which I loved. It had a great touch that I think needs to be extended but it worked really well. A PK sequence which was great and one part that fooled me initially but I have a few ideas how or to achieve the same effect.

I'll say no more other than Dynamo, Dan and team, well done, it was a huge task but you did it.