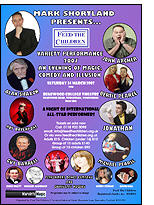 Bearwood College in Wokingham, Berkshire is the ideal venue for a magic show. A very impressive building, it’s a real Hogwarts lookalike and I was half expecting to see Professor Dumbledore strolling across the courtyard, or Hagrid acting as parking attendant. The occasion was the 2007 Feed The Children Variety Performance staged by The Magic Circle last Saturday. Audience members arriving at the College theatre were greeted by Chris Pratt, Kerry Scorah and David Ball performing close up miracles in the foyer. Once the capacity audience had settled into the theatre the show kicked off with a high energy dance routine by the young good-looking guys and girls of the Performers College – they made me breathless just watching! Host for the evening was Mark Shortland who did a great job, dashing round the audience and keeping everything moving smoothly. First act of the evening was Michael Pearse. A wonderful twinkle in his eye, a charming Irish sense of humour and an endless flow of gags combined with some impressive juggling stunts, set the show off to a superb start. Next up was singer Charlotte Rogers, the only non-magical act of the evening, who was accompanied by the Performers College Dancers. Charlotte was followed by Bertie Pearce with Miss Angel Eyes and together they provided some entertaining interaction with several members of the audience. Closing the first half was Jonathan Shotton who produced cards, silks, candles, doves and a bird cage finale in a well received act. Jonathan was also the Executive Producer of the show. During the interval Chris, Kerry and David provided more close up entertainment and, judging from some of the comments I heard, proved a very popular part of the evening.

The Performers College dancers opened the second half with another energetic routine – these guys really worked hard. First act of the second half was Roy Davenport with his trademark coin and thimble manipulations and fast paced Chinese Ring Routine. With a beaming smile Roy looks like he’s having a great time on stage and he was really appreciated by the audience. The next performer was Alan Shaxon who I can sum up in one word – sophisticated. He looked immaculate and performed some of his trademark routines such as torn and restored newspaper, nudist deck, £20 note in salt cellar and hydrostatic glass. John Archer was next and, for me, the real highlight of the evening. A mixture of hilarious comedy and baffling mentalism left the audience breathless and totally baffled…oh, and he also swallowed a balloon !!! He was a huge hit. The final act of the evening was a real treat – the impressive illusions of Guy Barrett. Guy and his assistant worked really hard and presented a mixture of large scale illusions and smaller items. An excellent end to the evening. Overall it was a wonderful show and everyone concerned should be congratulated and thanked for donating their time for such a worthy cause – helping children in Africa and other disaster areas. I should also mention the backstage crew of Sarah Carmichael, Michael Carr, Barry Nowland and John Wright who kept things running smoothly. My only comment is that it would have been nice to reintroduce all the performers at the end of the evening – they all certainly deserved a second round of applause. An excellent evening.