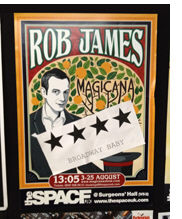 The Edinburgh Festival Fringe, which takes place every August, is well known for its comedy. Less recognised perhaps is how the world’s largest arts event is increasingly becoming a singular public stage for the nation’s magicians, not least thanks to a significant growth in the Fringe’s Cabaret category during the last five years.

Award-winning magician Rob James had two reasons to bring his “retro-modern” magic show Magicana to the Fringe this year. “I love Edinburgh during the Fringe and I can't think of anywhere else in the world I would rather be,” he says, “so the fact I get to be here for a month, combined with the fact that I am pushing myself a little creatively, makes it very exciting. I want to get better as a performer; 20 shows, plus assorted guest spots around the Fringe, is a great way to do that.”

Ripon-born Chris Cassells, who told a history of magic tricks from “Houdini to Potter”, agrees. “Bringing a show to the Fringe has been something I've wanted to do for perhaps three years now,” he explains. “I started seriously trying to put a show together immediately after visiting the Fringe last year as a visitor, inspired by the range of acts — including magicians and cabaret — that I saw.

“Clearly 'anything goes' at the Fringe and it is a fantastic melting pot for all creative talents; importantly, it has a somewhat 'captive audience' of thousands who collectively have aspirations of seeing shows of every genre,” he adds. “Additionally, I can't think of another 'festival' in which the audience is so open to watching new theatre which may be out of their comfort zone. The Fringe also allows that to happen through flyering, word of mouth and reviews.”

This bustling environment was a real attraction to sharp newcomer Simon South. “If I went home to Chester and said: ‘Right, we’re going to go to the Empire theatre and put on an hour-long magic show’… at the end of the day, given the number of people who will be interested, it’s not worth it,” he says. “Coming up to the Fringe allows performers like me to actually have a show, for a certain amount of time, and to get people in to see it. People here like magic, freaks and things like that — and I’m all three!”

While ‘magic’ is a word mentalist Doug Segal doesn’t let within 100 yards of his publicity material, he is aware of the growth in the number of magicians coming to Edinburgh — even if he doesn’t “hang out” with them. “Three years ago there wasn’t that much,” he says. “Now there are people like Pete Firman who have created a market for magic, but they’ve done something very different from just being a magic act. I could be wrong, but I think the audience for magic is mostly magicians! In terms of public shows, if you come up to Edinburgh and do something different, you can make a name and use that to propel yourself in a career.”

The Edinburgh Festival Fringe 2013 will run from 2-26 August.