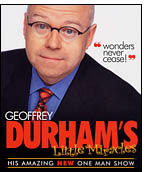 I was lucky enough to have a seat, with my son Seb, at the first show in a run of previews, before Geoffrey takes the show on the road. The show, last night, was at the Queen Mother Theatre in Hitchin, Hertfordshire, and although only advertised locally by the theatre the auditorium was full with an expectant audience - and we were not to be disappointed.

The show started with a quick explanation that this is indeed a one man show, and save for a few willing volunteers he was right. Two hours of magic, chat and comedy later I would recommend this show to anyone, of all ages. Geoffrey is truly a gentleman treating each and everyone of his victims with the courtesy they deserve, which made for a great show. The humour was daft - which I like - and the magic visual, puzzling and mostly ending with that wow factor most other magicians crave for. A fair proportion of the routine did include audience participation and it is worth mentioning that you may be called upon to add up some numbers. If you have problems with simple mathematics please take a calculator just in case you're the one!

I am not particularly a fan of reviews that contains a list of trick effects and illusions and so will not include that here. In any case the chances are that some of it will change by the time Geoffrey has honed the set for his Wimbledon launch. Suffice it to say there is a real mix of the "five" tricks described by Devant (I think) including everything from mentalism to levitation, stage work and close up. How does he do it?

A great show and I wish Geoffrey every success.