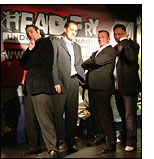 Another fantastic night of magic at Jongleurs!

On Tuesday 2nd August Leicester got its second helping of mind blowing magic from the Headfry team.

The team of four top UK magicians, all members of the Leicester Magic Circle, debuted at Leicester’s Jongleurs last month to a sell out audience. The format was a stage show of miraculous proportion incorporating a bank note produced from a kiwi, mind bending mentalism, glasses and bottles appearing from nowhere, and a touch of the dark side with some razor blade swallowing!

The second dose from the team this month (another sell out), featured each of the four magicians stunning the audience with their close-up magic. Situated in each corner of the room the guys invited the audience in to be mystified and amazed by the magic happening right in front of their widened eyes. The finale was a magic face-off with the Headfry team competing to perform the wildest effect for the audience. First there was laughter and then many stunned faces at the large Jongleurs window as a chosen card appeared in a shop window across the street, beat that Mr Blaine!

The Headfry team is Will Gray, Dade Freeman, Phill Smith and Dan Gifford. Headfry provide the perfect mid-week medicine on the first Tuesday of every month at Jongleurs, Leicester - will Tuesday’s ever be the same again?