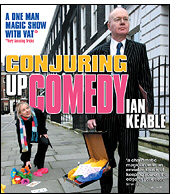 When you think of accountants, you think of great showmanship, rapid-fire wit and a rare talent for mystery. Or at least you would if you based your opinion on Ian Keable, a former professional accountant who gave it all up to become a full-time entertainer. As he explains in his new show, he still isn't sure what kind of an entertainer he is: a skilled comedian who does magic, or a magician with a rare gift for comedy? Either way, it's a winning formula. Over the past 15 years, Keable has established himself as one of the country's top club and cabaret entertainers with a neat sideline in after-dinner speaking. Now, for the first time, he has devised a full-length solo evening show which he will be touring around the country. The show is loosely based on stories from Keable's life and his transition from number-cruncher to comedy magician. "Maybe it wasn't that much of a change," he points out, taking to the stage holding a briefcase and a morning paper.

The first half of the show sees all the 'trade mark' Keable touches well to the fore. The comedy ranges from corny gags (offered up purely for their groan value) to razor-sharp interactive wit proving that you can have fun with spectators without either victimising or embarrassing them - a point that some other entertainers could do well to note. The magic is wide-ranging, from traditional classics (Chinese Sticks, Die Box) to good, entertaining card routines and some impressive mind-reading.

In the second half of the show, Keable treats the audience to a magical 'tour de force', seamlessly blending several classic routines into an extended magical journey leading to an impressive set of baffling climaxes. At the heart of this intricate yet well-structured hour is Keable's 'bill in lemon' routine. Honed to perfection by countless performances in top comedy clubs over many years, this is Keable's signature routine and still the very best of its kind. Other magical happenings in the second half include a striking prediction effect and an extended comedy sequence with a borrowed watch. That Keable can blend these distinct magical elements into a coherent sequence, one that is both easy to follow yet laugh-out-loud funny, is a great tribute to his experience, his shrewd approach to scripting and timing, and his sure-footed handling of the audience.

Keable is an assured and instantly likeable performer whose in-depth experience is evident throughout this richly entertaining show. The pace never flags, the two hours seem to fly by and it clear that Keable could make the show even longer if he wanted to. A triumph in every respect.