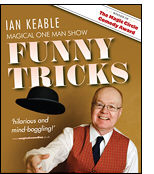 I was driving through Leominster, a lovely town on the England/Wales border, and was waiting at the traffic lights. Glancing to my right, there was Ian Keable’s face on a poster advertising a local appearance! A quick call to Ian and I’d arranged to meet him at the venue to watch the show.

If you imagine Bockleton as nowhere, then we were right in the middle of it! Nevertheless, a healthy audience of about 75 turned up to enjoy the performance and a few drinks and nibbles.

Ian divided his show into two halves. The first half followed the premise of “what techniques does a magician use to deceive the audience?”

Ian is a great fan of the classics of magic and had ingeniously adapted his patter for standard tricks to fit his theme. For instance, a C&R Rope routine was used to show how a magician can use comedy to distract the audience; similarly Ian stressed that the performer should never tell them in advance what they are going to do while using a T&R newspaper to make his point.

It was good to see the classics still have an impact during Ian’s version of the “Chinese Sticks” with the Roy Benson third tassel finish.

I enjoyed Ian’s handling of the “Miser’s Dream”, which really is a great effect for extracting comedy from the situation. This and one of my favourite tricks - “Cards up the Sleeve” were used to show how an audience can be fooled by pure sleight of hand. Ian performed them both excellently.

Ian’s handling of the Stodare Egg came straight from his lecture notes and had a couple of novel touches, as did his streamlined handling of “Sidewalk Shuffle”. This latter trick proved very effective as a demonstration of “quickness of the hand”.

Ian’s version of a seldom performed effect, “The Sympathetic Silks”, was inspired by Potassy’s handling and made an excellent vehicle for demonstrating “misdirection”. I’ve never been a huge fan of this trick, but Ian’s patter theme made it logical and entertaining.

The use of a “glamorous assistant” was explained during Ian’s version of Oswald Rae’s “Holdup” routine, with the aid of a lady from the audience. Once again Ian had injected his own thoughts, incorporating a novel nest of boxes finish.

Ian’s Himber Ring routine came next. The strength of this effect depends on the audience being sure that the rings are not switched. Ian has gone for the traditional “brute force” approach to the necessary sleight and performed this difficult manoeuvre very well. The audience seemed to be totally convinced.

Once again the Roy Benson influence showed itself during a six billiard ball production to music, and a Chinese Linking Ring routine, both had many novel touches and provided an excellent close to the first half.

After the interval, Ian performed his corporate act, which provided a nice change of pace.

He opened in “mental” mode with a “Brainwave” style effect, which unfortunately went wrong. Ian was cleverly able to recover later with a callback to this effect, producing the correct card from a zippered wallet during another routine.

More classic mentalism with Ian’s “Confabulation” routine followed by Koran’s “Newspaper Prediction”, incorporating a great bit when selecting a spectator using cards to select the appropriate form of greeting. I won’t give this away – go and see the show!

The Koran dictionary test, a date prediction, and a card memory stunt followed, to bring the “mentalism” portion of the night to a close. It would be a lesson for all mentalists to see how much humour Ian manages to extract from classic effects. He doesn’t try to convince his audience of his “abilities”, preferring to follow the Graham Jolley approach of entertaining them and letting them make their own minds up.

He closed the show with his handling of the “Electric Chairs” coupled with the" Cards Across”. Despite having two assistants, who, let’s say, were not the “sharpest tools in the box”, this brought the house down and got Ian off to a great ovation.

Roy Benson showed his face again during Ian’s encore piece – the “Salt Pour” for another ovation, before Ian exited the stage with a nice callback to the music used in the first half.

The audience left having enjoyed an excellent show, watching an experienced professional performing great magic in a very entertaining manner.

Watch out for future appearances, and if you get a chance to see the show, make sure you take it. You won’t regret it!