James More - A Winner For Sure!
Bournemouth Star Trail / Search For A Star
by Mike Danata 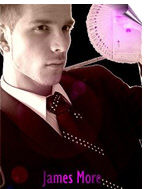 Before I go into the review, I'd like to give you a little background on James:

I probably first met James when he was about thirteen years of age, it was at a car boot sale one Sunday seven years ago. I had a stall, selling Jokes Tricks and Novelties, I never had the Magic Studio then, but I did have a costume shop that also sold bits of magic. I used to sell the "Smaller Magic" at the boot sale. I do remember meeting James a couple of times at this particular location, and whenever I saw him he would ask if I had any "Better magic effects for sale?" It was through James and a handful of others, that I started getting bigger and better items in stock, with the small stuff on the tables at the front, and the "Better stuff" on the tables at the back.

One Sunday James turned up, it was his birthday, so he had some money to spend! I remember him telling me that he had been trying to make a pack of cards, that would make a freely selected card rise from the pack, I turned to the table behind me and picked up a Devano Rising Card Deck, and showed him, his face lit up, as he explained that he had been trying for weeks to make a similar thing! He purchased this along with other items, and probably spent all his Birthday Money in one go! In James I saw a reflection of myself as a kid, the JOY, The ENTHUSIASM, and the PASSION for MAGIC, I knew then that it wasn't to be a "Passing Phase"..................

I didn't see James for a while, and in the interim I opened up the Magic Studio having stopped doing the Car Boot Sales and Markets. I did wonder how long it would be before he discovered that a Magic Studio had opened up in his home town!

It didn't take long! He walked in one day, and we both realised who the other was! In the Studio we could talk without the fear of the "Public" listening to our conversations, as we discussed tricks and methods, I taught him front and back palm productions, and split fans etc, he seemed to be really interested in the manipulative style of magic, the "purer" type of magic, if you like. I also taught him the Dancing cane, and Floating Ball etc.

When he was fourteen, I went to support him in a talent competition at Weymouth Pavilion, he did very well, but didn't win. I was however VERY impressed with him, he had a lot of talent at a very young age, his routining was superb, and timing impeccable. I "Booked" him for my "Could It Be Magic!" show at the Barrington Theatre in Bournemouth, this was a one off show, held on 25th Sept 2002, this was the FIRST time I'd ever had anyone else performing magic in MY show! (I'm looking at a ticket as I type this) He was FANTASTIC, and I remember Derek Langley (one of my customers who was in the audience) coming up to me afterwards and commented on James by saying "Cardini is back!" a compliment indeed!!

Two years ago James got through to the finals of The Young Magician of the Year competition, but wasn't placed, my feelings on this have been well documented! At around the same time he was also entering the Bournemouth Star Trail/Search For A Star, winning all the heats, with the Judges votes AND the audiences votes! However when he got to the final, he was pipped to the post by a musical/singing act, James came a very worthy second.

Last year he didn't enter the competition, in fact he was doing shows in Spain!

This year James decided to have another go at the Star Trail/Search For a Star, once again he got through to the finals, which were held last Sunday 26th August. I started a "Campaign Of Support" through the pages of Talk Magic, my own website, plus, his appearance at the competition, was featured on MagicWeek. I wanted the magic world to see just how good James really was, and how he deserved their support. I was also under the impression that because the audience gets a chance to vote, that this could make a difference, I WAS WRONG! the audience did get a chance to vote, but it's the judges who have the final say, I didn't realise that! So the judges vote the winner, and then there's the audience choice. I always thought that the two lots of points (audience and judges) got added together! but that wasn't the case.

It's now Sunday the 26th August the day of the competition, I've no real idea just how many people in total are coming to support him. What I do know however is that two people are coming from Oxford specifically to see James! I met them both through the Studio, customers and then friends, their names are Sheila and Geoff, and it's SHEILA that does the magic!

I kept enthusing to Sheila previously about the Musical "Mary Poppins" in London (I've seen it three times!!) she went, and loved it, if I tell her that such and such a trick is GREAT she trusts my opinion, and will purchase on my say so. I told her she must experience the Blackpool Convention, she booked! I told her how fantastic James was and asked for her support, the next minute I'm sorting out the Hotel for her and Geoff!! I'm really praying that even if James does not win, that Sheila and Geoff will at least witness an amazing performance! and that nothing goes wrong.

Now (at last!) we get to the review of the show itself:

I get to the hotel fairly early, only to find that every single table is taken! No problem though at least there were plenty of chairs. I scan around the room, and notice a fair few people that were there to support James, of course these were only the people that I recognised, how many others were there for him, I really couldn't tell.

I felt that James had one Major competitor, and this was apparent during the heat that I saw two weeks prior, his name was Paul Michael, A Young Man with a PHENOMENALLY powerful singing voice. In fact it was at that particular heat that James DID NOT win the audience vote! It was won by Paul, BUT James won overall, because the Judges didn't agree with the audience!! Of course I hadn't attended ALL the heats, so never knew what else could turn up, that might pose a threat to James. On this particular night. I must say that the show was so diverse! Practically every style of music was represented, from Swing to Heavy metal ! with only one other non musical act apart from James, this was an Impressionist.

James was the tenth act to appear, closing the first half prior to the interval. James was absolutely the best I have ever seen him! His routining, timing, music, mime and DANCE, WOW! really world class! His dancing Cue Stick was awesome, the stick became his dance partner, and it was a properly Choreographed Dance Routine, as was the entire act, it really was the best! His card work has to be seen to be believed, James MUST rate as one of THE top card manipulators in the U.K. at the present time, producing not only regular cards but also JUMBO cards singly and in fans all without wearing a jacket!! He produced, multiplied and even juggled balls of various sizes, then produced two giant 8 balls at the end from a fountain of silks! All this performed to very fast exciting music, it was a visual feast, right down to the confetti explosion at the end. He received a terrific ovation! the audience went berserk!! Cheering and screaming for more! In my mind he was a worthy winner, the act had everything, BUT would the Judges be BRAVE enough to break the tradition of having a Musical act in first place? I wasn't sure at all, I did however have a "Funny Feeling" which I had mentioned to Sheila in an email a week or so before the event. I really felt that James's time had come........

I will also add here, that as the public becomes more and more aware of magic and some of its principles, there is something about what James does, that makes even a lay person realise just how skilful it all is, even though they perhaps don't really know how it's done! Of course if you are a magician, then you already know just how much skill is involved. I can honestly say, that I didn't see ANY of the steals, you were just treated to surprise after surprise with breathtaking precision and expert timing.

I still wasn't sure if James would WIN, although I thought he deserved to, based on his performance which was flawless.

The interval followed, and then another TEN acts! What was more than obvious at this point was, that this was going to be no mean feat for the judges to pick just ONE winner from an abundance of really incredible talent!

After I had seen all the acts I still thought that James's MAIN competition was Paul Michael the singer with the big voice who finished on Nessum Dorma.

There then followed a short break whilst the judges deliberated and the audience votes were counted.

Then the results were announced by Guy the Compere:

"The audience vote goes to PAUL MICHAEL" (This was in my opinion James's MAIN competitor! and of course he COULD also be the Judges choice as well!)

"In second place is Katee" (a very good girl singer, but I must admit I was surprised at this choice of second place). At this point everyone there to support James, realised it was now ALL or NOTHING!

The suspense really built up at this point, could it possibly be that "Our James" wasn't even to be placed this year? Was the winner going to be Paul Michael the audiences choice? The excellent Compere called Guy really built up the suspense as he slowly and deliberately announced that "The Winner this year is act no 10 JAMES MORE!!" James's face was a picture! even he doubted if he would actually win, but he did, The room went wild with cheering and whistling etc. James had done it!

In Tuesday night's Local Paper there was a very small piece on the competition, the headline read:


"STARS IN THE MAKING" (By Hilary Porter) who wrote:

"In my 17 year association with the Star Trail, this was the toughest one yet to judge.
Outstanding acts kept us enthralled, with just one going on to represent the town in the British Resorts and Destinations National Final in November.

The winner was charismatic Bournemouth Magician James More, 19, whose choreographed dance moves and finely timed and perfected magic was delivered with great expression.............

James now goes on to represent the town in the British Resorts and Destinations National Final on November 24th, at Leamington Spa. I do hope that magicians in and around that area will go and witness the magic for themselves, the magic that is James More, a REAL WINNER FOR SURE!