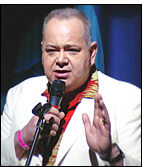 “He’s irreplaceable – and I’ve tried” was the introduction to his support act, John Archer, by Tim Vine. After a few gags – including a very logical and funny way of getting the audience to applaud for your entrance again – John said he was going to “mess with our minds”.

And he did precisely that over the course of three tricks, spread over his half hour set. The first was a prediction of a jumbo card in envelope, prefaced by a ‘shaggy dog story’ about his three years studying under Professor Hoffmann in Buffalo New York. The second, a Just Chance routine with five envelopes, ending up with John keeping the one containing the sixty pounds. And finally a type of Tossed Out Deck routine, but getting the spectators to shake a die in a cup rather than looking at playing cards.

Although the effects are very strong, this is almost secondary to John’s interplay and masterful ad-libbing with the audience, the running gag of ‘picking’ good naturedly on one person and his unique ability to make long and complex explanations and summarisations funny. Equally impressive is the fact that all three of these routines have been broken in and perfected over the course of this tour - he hasn’t relied on tried and tested material.

John is absolutely at the top of his game. Even if you’ve seen him before, this is well worth catching as a master class from arguably the best UK comedy magician around at present. But you are going to have to hurry – the tour finishes on 12th March.