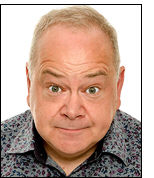 John Archer has long been a friend, confidante, writer, TV cast member and, if that wasn’t enough, opener for that one-liner comic, borderline national treasure and four-time winner of The Funniest Joke At The Fringe: Tim Vine. In a full, midweek evening at Swindon’s Wyvern Theatre the pair romped through only the third showing of Tim Vine’s 60-date UK tour rejoicing in the title ‘Sunset Milk Idiot’. The first half of their punishing schedule already sees some good-sized theatres hanging out the Sold Out signs.

John Archer has put together a new show for the tour, whilst the headliner previewed his show at Edinburgh back in the summer of 2017. Nevertheless, both are finding their way through unfamiliar shows – although, delightfully, it scarcely shows.

The trick count in John Archer’s set is restricted to just two lengthy routines, each in the familiar Archer mould of comedy mentalism. He contents himself by opening with a very well-tried, throw-away visual magician’s gag (why? he’s better than this) before embarking on a pleasing version of the McCombical Cards.

In this version the ‘prediction’ that changes, to match the spectator’s mis-taking of the chosen card, is a bottle of liquid, adding a degree of organic realism to the whole thing. Jaded magicians in the audience would have been taken aback at the screams he got, first from the revelation of the spectator taking the ‘wrong’ card; even more so from the revelation of the bottle of orange changing to a bottle of cola. The Swindon audience were in an affable mood, admittedly, but this got a reception that must have done Archer’s heart proud.

Then he demonstrated his new lottery routine – that was a real audience-fooler and -pleaser. In summary, 6 randomly chosen (by the now time-honoured method of throwing around a stuffed toy; even from this he wrung some nice laughs) spectators freely chose numbers from 1 to 60. After a nice twist, these ended being the very six numbers on a printed lottery ticket, that not only did the spectator take with him, but was entreated to show to all curious spectators in the interval. I guess a lot of magicians will puzzle over how this was achieved, so one can only speculate about how a layperson is likely to react.

Throughout, the set was peppered with funny bits of banter and Archer enjoyed a great relationship with the audience. Conventioneers will not be surprised to learn he closed with a comic song accompanied on his beloved ukulele. They loved him.

There were few surprises in the Tim Vine’s set that followed the interval; his fans adored the familiar formula of the rapid succession of puns and wordplay, daft songs, a great musical running gag, sight bits, self-deprecation and lovable, unfashionable nonsense. There are few indeed who can pull off this type of manic cheesiness, the knowing but well-intentioned crackpot acknowledging the inanity of his endeavour, but taking his task seriously and ploughing on regardless as he takes you into his cartoon world where a laugh is the only point of the whole exercise. And spoiler alert: his Bee Gees bit is a joy.

If you can leave your sophisticated, crafted-comedy self at home, you’ll have a great night out with both these fine exponents of their respective crafts.