Written and created by John Fisher 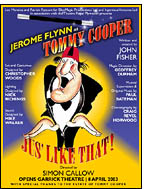 A lavish, flashy and showbiz-style set greeted theatregoers at the Oxford Playhouse for the week long preview (prior to its opening at the Garrick Theatre, London on April 8th) of John Fisher's new play about the life of Tommy Cooper.

With Jerome Flynn as Cooper, (an actor whose credits range from TV dramas such as 'Soldier Soldier' and 'Badger' to seasons with the RSC) and directed by Simon Callow (appearances in 'Four Weddings and a Funeral', 'Shakespeare in Love' and director of numerous plays) it was certainly going to be an interesting play.

It started with the Cooperettes, six tap-dancing females who introduced our magician to us. 'Tommy' performed bits and bobs of magic interspersed with the inimitable one-liners. After, we moved to his dressing room where he talked about his life: job, wife, magic, comedy and children. I felt that this part of the play lacked slightly in the exploration of Coopers problems (especially with drink) but there were many anecdotes of his life, which the audience greatly enjoyed.

After the interval, the actual magic show was performed and it has to be said that the magic, (bungled and not) was very slick (presumably due to Geoffrey Durham's magic direction). The 'Hats' and 'Bottle Glass, Glass Bottle' routines were both featured to great amusement.

The adlibbing by Flynn made the play so realistic (I am sure many of the audience at some point believed they were watching the man himself), and the fact that Flynn was alone on stage for about two hours (95% percent of the performance) show what an accomplished performer he is.

This, with the great magic, hilarious comedy, polished dance routines, catchy music and innovative set made for a brilliant performance. If you loved Tommy Cooper it's a must, if you were too young to know about him it's also a must. The laughter kept on coming and Flynn received a standing ovation from some members of the very appreciative audience.