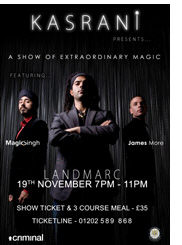 Well! where do I start?

Firstly, can you believe a whole show of magic in Bournemouth's premier nightclub, in the centre of town, on a Monday night? The show being completely "Sold Out" (at £35.00 per head too!) before the ink had dried on the very impressive posters? Well you'd better believe it because that's what happened!! So who was the genius behind this incredible piece of marketing?

The genius behind the show and its marketing was indeed Kasrani himself.

Who is Kasrani you may well ask? Well, because I know, I am going to tell you:

Kasrani is a young twenty something year old, born in Iraq, brought up in Greece, and now living in Bournemouth. He is obsessed by magic, lives and breathes it every day of his life. Kasrani has picked up quite a reputation as a "Street Performer" in the centre of Bournemouth, but he also does close-up magic in many of the towns clubs and bars. He has also performed for top celebs, and royalty, (so he tells me). I was also told last night by someone who knows him well, that he lives just five minutes away from the town centre, but to walk just the five minutes from his home can take an hour or more, he stops and talks to everyone, many people already know him, and of course he brings a little magic into their lives! He has an overpowering personality, a style that's very "street" i.e. scruffy looking, dreadlocked hair, loud, brash, swears a lot, but there is something extremely likeable about him. I predicted a while back on talkmagic forum, that he was someone in the magic world to watch out for, and indeed you must!

The other two guys in the show were Magic Singh and James More (both of whom I also predicted a great future for on talkmagic forum!) I never knew then that the "Tricky Trio" would be appearing together, so it was quite a coincidence, after what I had previously said, regarding all three.

James More a local lad who is destined to go far, I've said much about him in print already.......

O.K. so now on with the show itself:

"Ladies and Gentlemen your host for this evening KASRANI!"

Kasrani enters the stage, and welcomes the audience, he produces a Birthday Cake from a giant pan, for a celebrity guest in the audience, and then introduces his first act, "James More!"

James does his act as known, with the Pool table theme (to be honest there was a couple of hiccups in this performance but he still pulled it off!):

Multiplying Balls, Appearances, Vanishes, Dancing Cue Stick, Card productions, both regular and jumbo, leading up to Giant Ball productions at the end etc etc. James was concerned that he wouldn't do so well at this show, because Kasrani had sold most of the tickets himself to all his followers, and only two or three people were there for him. He needn't have worried, because everyone loved him, whooping and cheering all the way through, in fact if the audience were anything to go by, he stole the show! Truly a world class act, and is well on his way, especially after his appearance at the Stage Newspaper's Annual Showcase a few weeks ago, to which he received a great review in last weeks Stage newspaper, plus (more importantly!) some lucrative contracts abroad!

I watched James's performance from a side view off stage, and was amazed at some of the methods he employs for the "Steals" (he wore no jacket!) hours and hours of practice would have been utilised to get the split second timing needed to pull off the effects, my hat really does go off to him, for his dedication.

Kasrani then comes back and introduces his next act:

Magic Singh enters the stage with an Indian Takeaway bag in his hand, most of his act was inside the bag! His act was mostly a comedy patter act, where he spoke for the first part with an Indian accent, which was very funny, before he reverted back to himself, with his usual well spoken voice. His first effect was a flattened card box that produced a whole pack of cards to a big gasp from the audience! He vanished a girls ring, and it appeared in a sealed Pot Noodle pot, the look of amazement on the young girls face as she opened it up herself to discover it, had to be seen to be believed!

Magic Singh then removed an empty squished up coke can from his takeaway bag, and "Brought it back to life" to the delight of his audience. Some audience participation followed with the twisting arm illusion, where he got everyone in the audience to "Have a go" which was a lot of fun. Then with another volunteer, he performed the Sketch Pad Card Rise. Much of his patter effects were enhanced with music in the background, which really worked well. He has a gentle and polite manner, and the magic was very "Magical" and not drawn out. The audience really warmed to him. He finished to music, with an empty bottle that became filled with coke, in a waft of smoke, (it all looked very mysterious!) the coke changed to a silk, which then changed to a cane, beautifully executed, with fantastic music, a very well rehearsed and original act, the audience loved him, he received a great ovation.

I then introduce "The star of the evening, " THE ONE and ONLY KASRANI!"

Kasrani enters complete with Rucksack on his back! Started off with the Razor Blade trick performed to Greek music, the props mostly coming from the rucksack. Kasrani is the complete opposite to his guests, he is edgy, unrehearsed, outrageous! takes risks, and plays a lot on the fact that he is from Iraq, after the Razor Blades he proudly announced that he was born in Iraq, and he stood to attention as the Iraqi National Anthem was played (to complete silence in the audience, one might add!) after the Anthem had finished, he announced that it had been rewritten by Blair and Bush, and then requested that the new version be played, to which we heard sirens and bombs going off! with a "Da Da" at the very end. This did get a laugh, but I'm sure that some people may have felt guilty for the laughter it extracted. Kasrani takes risks as I've already stated!

Kasrani then performs some of his Street Style Magic but this time on stage. He shows some very nifty shuffles including the Russian Shuffle, but looses the gag, by saying "One card rushes after the other" instead of "One card Russian after the other"

The Indian shuffle where he slaps his face with the cards (to kill the flies) between shuffles (got a big laugh, once he explained it!) and of course the Iraqi shuffle, where he shuffles the cards, ducking and diving as if to miss the bullets!! (the audience did laugh). He then did Bang On, the any card to wallet effect, which could have been stronger, but for the fact that he KNEW everyone in the audience and drew attention to this fact! at one point he had so many other people shouting out cards, as well as the "selected person" because they thought he was a stooge!! so the effect was weakened. I think he should have got a toy hand grenade, pulled the pin out and threw it over his shoulder to allow someone to catch it (can't believe I just suggested that! but it does fit with his "Theme").

He then got a girl up from the audience to show her a "Penetration Effect with a rubber" and showed her Crazy Mans Handcuffs, which I really thought was too small for a big stage (with no big screen) but the audience did respond and applaud, so what do I know? We then had jokes about cocaine, joints, and Bob Marley! a cigarette appeared in his mouth, which when lit, vanished in a flash, and a rose appeared which was given to his young lady helper, which I thought was quite charming. He then turned raisins into wine, saying that people DO drink alcohol in Iraq, (as well as them doing lots of other things, which they claim they don't!! but just not as much of it, as we do in the west!). Kasrani then vanished a £10 from a spectator, and it ended up in a kiwi fruit. He then performed the Mona Lisa effect with the jig saw puzzle pieces, which was very effective, and got a great reaction from the audience. He finished with the production of red lights at the fingertips (all choreographed to music, complete with "Dance") as they were dropped into a bag, and you saw them cascade down one at a time, as the bag filled up. Very magical and visually very pleasing!

All in all, an enjoyable show, I'm still not sure about Kasrani being a stage magician, I do think he's got something though, he has a way with people, a unique style, and as I said in my intro he really is "THE ONE and ONLY!"