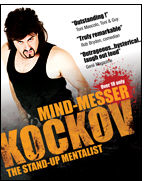 Jasper Blakeley as ‘Kockov’ had the audience roaring with laughter in his new show at The Glee Club, Cardiff. Performing as a Russian mentalist, his blend of outrageous humour and mindreading left everyone in hysterics.

Magic aside, Kockov’s hilarious handling of volunteers, quick adlibs and ability to tease and entertain an audience make his show well worth watching. For a first night of all new material, this was bold, brave and full of energy. As with all performance, improvements can be made, joins can be tightened and scripts can be sharpened, but Kockov has certainly found a niche for his act. Judging by audience reaction, everyone had a great night.

The Glee Club is a stylish venue and great for magic. It was refreshing to see a packed audience on a Wednesday night, and no doubt Jasper will be considering touring his show to other comedy clubs in the UK. This performer has landed on his feet, and surely this is a sign of a promising future.