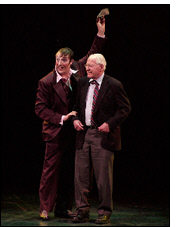 I've known Lee for over twenty years and when we shared a house in London way back then, we always talked about our dreams of 'making the big time'. By chance I was in Atlanta on business, where Lee has a starring role in the latest Cirque de Soleil spectacular hit creation, "Kooza".

I feel Lee’s success as a performer is due to a culmination of over twenty years of hard graft, establishing and perfecting his craft, working the good, bad and ugly gigs, but forever striving for something more. To acquire this prestigious role, he fought off fierce competition from other professional pickpockets around the world. Who wouldn't want to tour the world - and be very well paid for it at the same time?

Lee has the only non-scripted part in the show, and only uses pure pickpocketing skill. Not a magic trick in sight, no sponge balls, no cards, no coins to distract his volunteer, just his astounding showmanship, improvisation, physical comedy, verbal skills and electric persona.

With a 2,500 seated arena and eight to ten shows a week, he is the only person in the show to be introduced with his real name. His section in the show is different every night; he has seconds to find a volunteer from the audience (no stooges are used), find someone wearing a jacket and someone who may have something in their pockets. And he has no guarantee how they are going to re-act on stage.

The mild Atlanta weather means that most people were wearing very casual clothes, but Lee managed to relieve his volunteer of his camera (and took photos of him without him realising it), watch, wallet and ultimately, his tie. Lee Thompson is very funny and he makes it look so easy! By the time you read this the show will have moved to New York for two months. I loved every minute of the show and would strongly recommend you try and see it if you can.