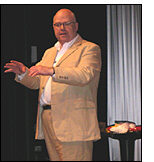 As Autumn approached the Nottingham Guild of Magicians once again presented their Annual Magic Extravaganza at The Bonnington Theatre, Arnold, Nottingham.

This excellent day will take some serious beating.

During the afternoon the shows Top of the Bill, Geoffrey Durham (photo) entertained a very healthy nucleus of magicians with two hours of very sound advice and let's face it, he has the experience, which he generously shared with all.

He captivated those present with the delivery of a seasoned Shakespearian actor; his main early thrust was to encourage all of us to tear ourselves away from the electronic images of the DVD and the Internet and read Books. The rationale behind the postulation was, that to watch a trick performed over and over is a route to disaster; because you will adopt their timing and it’s your own timing when performing that’s essential.

The maestro did not leave it at that. He then made the point perfectly by performing the torn and restored newspaper, in a manner never seen before. Those present were almost convinced that the paper had not been torn. God help any Muggles who would watch the presentation later!

Geoffrey then went on to explain that the audience has to like you and in his view you have about 10 to 20 seconds to convince them that they want to invest the next 20 minutes or more of their time, in you.

Rhythm, timing and simple plots all lead to a satisfactory performance but Mr Durham has that little extra that can only be described as panache.

The lecture ended with the Guild making Geoffrey an Honorary Life Member.

Just before the evening show Michael Pearse the comedy juggler, treated the same group of magicians to a mini lecture on the Ring on Rope with numerous routines and moves. His skill was mesmerising, his delivery slick and there was more jaw dropping going on than learning I suspect!

So bring on the main event, the evening show, compèred by the Nottingham Guild’s very own Charlie Petersen and spectacularly opened by the Magic Light Puppets, billed as an “Ultraviolet Delight” these are in fact the fluffy fluorescent alter egos of Stuart and Jayne Loughland who would later Wow! us as Safire. To be frank you ain’t seen nothing until you’ve seen a 5 foot octopus performing “Riverdance”!

Still blinking from the colorful onslaught another sparkling performance followed in the shape of James Smith from Lincoln with his Reflections Act; the main thrust of which is the spectacular production of ever increasing sized mirror balls.

Of course if James had had his way it would have been even more spectacular, you see a privileged few of us had seen the full effect of the act during the afternoon set up when his programmed laser was allowed to reflect off the balls and dance beams around the auditorium. However, we must all apparently pay homage to the ever self perpetuating industry of Health and Safety. Quite frankly your reviewer was pleasantly surprised to find that the acts were allowed to cross the car park unassisted let alone use, smoke, pyro’s and lasers. Still thank you very much James for a polished performance!

There was an air of anticipation as Michael Pearse took to the stage, and so there should have been. This accomplished juggling act is exhausting to watch. The gravity defying deftness is a vision itself but to quote another well known Irishman “And there’s more” The balancing of golf clubs and manipulation of tennis rackets with two sticks is accompanied by a ceaseless barrage of side splitting commentary including his Uncle ‘who knew when he was going to die - because the Judge told him’ Come back soon Michael.

To close the first half……Safire. This bubbly couple from Wales performed a whirlwind of illusions including the Crystal Sub Trunk, Heads Off combined with a Twister and the Mini Cube Zag. Jayne was dismembered and all contorted but in this enlightened act she gets her own back when it is Stuart who ends up in the Sword Cabinet; his dying gesture with a wilting hand and to all intent and purposes his “spirit” represented by the appearance of Sooty. This is a very refreshing take on some very well executed illusions. The duo’s facial expressions are just the icing on a very delicious cake.

Geoffrey Durham was the second half of the show. Often described as one of the country's finest performers and magical thinkers he went on to demonstrate exactly why. You will recall that in his lecture he had postulated that the performer has about 10 to 20 seconds to capture the attention of the audience? Well the atmosphere was such that he had undoubtedly achieved that whilst tying his shoe laces in the dressing room.

The next fifty minutes or so was a roller coaster ride of superb entertainment, volunteers must have thought they were the most important people in the world as his management skills oozed.

Tricks performed included; Torn and Restored Newspaper, Coin in Bottle, a fantastic Himber Ring routine, and a Numeric Prediction that gathered momentum so gracefully that although the ride was getting faster and faster, you were sure the wagon would never come off the rails.

Geoffrey’s Signed Note to Card left your reviewer, absolutely mesmerised, despite the fact he had seen the Great-One perform the effect numerous times before. His four pint water suspension left the auditorium in a state of pure wonder.

Many magicians left the theatre having been shown the utmost techniques and determined to emulate at least some of them.

If they didn’t they damn well should have done.

Geoffrey Durham you are a Magical Icon!

Devised by Freddie Wilkinson and Andrew Morrison, with Roy Bond, Rhys Smith and Barrie Perkins working extremely hard backstage plus various other Guild members all kindly given their time to make the day a great success.

The next planned extravaganza is on Sunday 28th January 2007

See you all there,