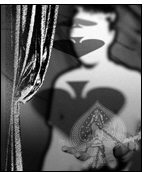 Magick and Mayhem by Jay Fortune had it's debut last night (19th October 2007) at the Jermyn Street Theatre in London's West End. This show is far from the style of Paul Daniels on a Saturday night. The material deliberately shocks and touches on the unpolitical correctness of society today and how even the apparently harmless card trick has undertones that WILL offend.

From blow up dolls to a sick child performing a card trick this show will offend - except it doesn't, the magic is first class and the cheeky lovable character and persona of Jay Fortune just simply gets away with his tongue in cheek rudeness and observations. He is a high quality entertainer first and foremost.

From card tricks which tell peoples fortunes and future, together with character analysis from cards (even the bad bits are told) including the 'fate' of some audience members through to the 'old uncle' who taught Jay his first magic trick (maybe a bit too far, but again he is forgiven)

This show is not for the faint hearted and for those of a nervous disposition or if easily offended ... Come along .... you'll love it.

Every Friday at 11pm to December 7th, Jermyn Street Theatre.