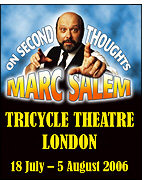 The lay audience was audible in its gasps of amazement!

Apart from the well-honed ending with blindfolded Marc divining information on cards filled out by audience members or telling people which personal objects they had displayed in front of him, the material was different from that used in his last show ‘Mind Games’; but most of it was achieved through simple methods. The public loved it and they were fooled time and time again… egged on, no doubt, by such moments as the failure of a version of ‘Smash and Stab’ when the blood flowed freely as Marc’s hand mistakenly crashed down onto the point of a knife secured under a polystyrene cup. Luckily he had a feeling about it and didn’t smash quite as heavily as usual, saving himself from a total impalement.

The show started with a cheeky opening trick – everyone was urged to think of a number. One number was seen written on an envelope and, when opened, this revealed a description of the only woman in the audience who had thought of that number. Later there was an interesting book test involving a random couple, he writing down a word from a book and she being able to name the letters of it one by one.

Two tricks involved selections of objects – a ‘murder mystery’ where coloured balls secretly taken from a bag revealed the culprit and victim. Another used selected coloured poker chips and included written proof of the colours fastened to the chairs also freely selected by the volunteers.

There was some pulse stopping, both Marc’s and also of a member of the audience, as well as time altering on a watch but one of the best effects was a Deal, No Deal idea using a small safe on stage and four silver attaché cases. Each contained a combination to the safe but, strangely, only the one left with Marc at the end opened the door to reveal £20,000. One couldn’t help leaving the theatre wondering if the method was weighted safely enough in Marc’s favour…