Marc Salem at The Carriageworks 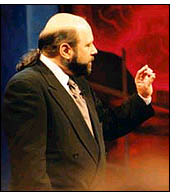 Well I’ve seen Marc Salem three times now and third time was definitely lucky. This was a show in which we saw Marc Salem at his best. Relaxed, friendly, at home. A performer sure of himself and his material and totally in control of his audience. A receptive audience of around 350 in the intimate Carriageworks Theatre enjoyed one of the highlights of this year’s Leeds Jewish Performing Arts Festival. A brilliant ninety minutes with Marc Salem prior to his London run at the Shaw. (July 22nd-27th) If you have the chance, go and see him. www.theshawtheatre.com.

Marc took us through his now familiar “Mind Games” as he “warmed up” and the audience warmed to him. He even turned the lack of direct access from auditorium to stage into a running gag as he effectively worked his audience bringing a succession of helpers on and off stage by a circuitous route. But this audience wanted to believe and he left them believing and wanting more.

What did he do? Mostly familiar material but all in his own style and superbly “sold”. Opening with a very strong magic square he followed with his signature swami-work but a bit crisper than I remember before (probably the weakest material in the show). A bank-nite with large coloured envelopes was followed by a “Sneak thief” drawing routine on large boards with lots of laughs as he pursued a body language theme. I didn’t make notes but I remember a very quick book test and a Confabulation with an espionage story (and an attractive young lady wearing specs who couldn’t read the prediction).

Should he have had a second mike for the use of assistants? A short, chunky fifty-something year old bald male possibly should not be asking a tall leggy blonde less than half his age to bend down and talk into his lapel mike!! Or should he?

The highlight of the show was undoubtedly the blindfold routine with which he closed. Two doctors from the audience applied the coins, duct tape and scarf after which Marc identified a series of personal objects borrowed by the overworked medics scurrying back and forth interspersed with a series of Q&A type revelations of thoughts provided by audience members. It created a fast moving situation in which the description of the borrowed object would be interrupted by the sudden arrival in Marc’s mind of a “thought” belonging to someone else. Great fun and totally impossible to the lay-people whose opinions matter.

I thoroughly enjoyed the show and so did the mainly lay audience (I did spot Franklin, Harrison Richards and Roni Schachney in the audience). Marc will be at the Shaw Theatre, London next week, July 22nd to 27th. That’s the theatre used for the International Day. If you can get there make the effort, more info at www.theshawtheatre.com.