Max Somerset: An Evening of Magic 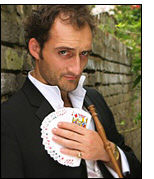 Two days ago, I got a flyer through my door regarding a new café/bar in my hometown. I had seen it but hadn’t been on the website or been in. It turns out that they book acts and have a performing area. I glanced at the card and saw that Max Somerset was coming the next day. I booked a ticket without hesitation. I was thinking is this REALLY a good idea, going to see a magic show late at night in a pub after having to get up for work at 6.20 that morning?


I’ve seen bits and pieces of Max on the internet and TV, but had never seen him live. He wasn’t really introduced so much as that he had got everyone’s attention by the time he’d finished checking that his microphone worked - there were a few problems with sound but he coped like a true worker.

Introducing himself and what this evening was going to be about, he did a couple of bits of body magic which went down very well. He then followed on by introducing us to Dippy the mind reading duck. Max used a card duck to find a wrong card before remarking “I think it’s important that the warm up act is slightly worse than the main star.” I couldn’t help but think “why does he buy tricks that are in no way cheap just to turn them into gag tricks?” the audience seemed to find it funny anyhow. Coming onto the serious stuff, he did an elaborate version of Smash and Stab with large paper bags and a scuba knife. Max did a good job with the presentation and handled his equally witty volunteer very well.


A chop cup routine was up next. It’s good to see classic stuff going down well with the general public. He followed that with a confabulation-type routine with a theme of casinos. Getting a volunteer up on stage, he introduced a glass full of poker chips from different casinos in America. The volunteer chose one and without looking put it into his back pocket. A deck of cards was bought out and two cards were chosen (in a fair manner I might add). They were also put into his pocket. Finally a stack of Dollar bills were introduced. The spectator cut a stack off and placed them inside an envelope.


Max opened his prediction that had been in full view throughout the evening and he had managed to predict exactly how much money would be chosen, the value of the two cards (blackjack hand) and exactly which casino the money was fun in. Excellent stuff!


Mr. Somerset then did what is essentially a tossed-out deck but with scrabble tiles revealing three thought of letters. Hugely entertaining and it went down very well with the lay audience.


After the interval, we were shown the dippy duck bit again, again it wasn’t meant to be a real trick and it had some different jokes with it. This was followed up with a brilliant coin in the hand routine which was very baffling and again, hugely entertaining.


A two phase routine with a couple was next with Max touching the nose of the man while the women thought it was her nose being touched (she had her eyes closed). This was followed up with an electric chair phase. Finally Maximillian showed us the Great British Watch Smash. It’s every bit as good as it sounds, very baffling, really enjoyable and just a huge joy to watch. I know lots of people are looking forward to this coming out.