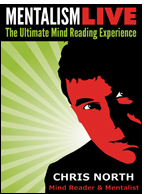 I have seen many types of mentalism over the years and to be honest, I have found it boring, a bit mundane, lacking of any flair.


So when I was asked to go and see Chris North’s Mentalism Live, I was not sure what to expect, but when Chris came out from the outset it was dramatic, throwing balls of paper into the audience, getting everyone involved and setting the tone for an evening of entertainment.


The show moved at a steady pace with plenty of audience participation, it was at times humorous yet serious, keeping the audience gripped with anticipation at not knowing what was going to happen next and then a sudden gasp of amazement at what they had just witnessed.


The show lasted an hour and 45 minutes with an interval of 15 minutes. I never once looked at my watch as it held my attention right from the start with some interesting twists. I would recommend it to anyone.