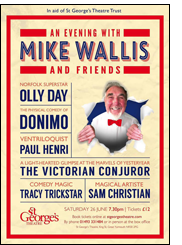 The magic returns to Great Yarmouth and St Georges Theatre was the venue for a unique variety show. Mike Wallis had gathered his talented friends for a sold out socially-distanced show that had the audience entranced in a joyful journey through Mike’s amazing career and the great friends he has made. An opening monologue from Mike took us back to his roots and his encounter with Mr Punch, displaying his original Punch and Judy puppets he entered a booth centre stage for a skilful display and comical story from the famous couple. This 10 minute revue left me wanting more, and received excited responses from the audience.

Then came the twist, Mike appeared from the wings revealing that the talented performer in the booth was none other than Daniel Hanton, writer and illustrator of the Punch and Judy book “Beside The Seaside”. Mike’s warm delivery of excerpts and stories from his performing life gave a lovely narrative to the show as he introduced his star performers.

Sam Christian's cheeky personality carried a hands off “choose a card” routine that led into a surreal world of hamsters and swords, eventually impaling the chosen card for the final applause.

Donimo, a busy international performer that you don’t often get to see in Great Yarmouth was just outstanding. His visual comedy and emotive character portrayal was clever, smooth and just hilarious. Such a talented performer!

Many would say Tallulah Twankey bears a striking resemblance to Mike Wallis, which of course he strongly denies with a cheeky smile. Mike’s, sorry Tallulah’s life is just one crazy set of comical events.

“Can you see his lips move” ventriloquist Potty Paul Henri, had his performing partner, George T Monkey very close at hand, poking light-hearted fun at Paul himself and the ups and downs the country has been through, this monkey didn’t hold back! Paul played a few assisting roles throughout the show and his friendship with Mike, as with all the performers, shone through.

Tracy TrickStar, a bright and stylish performer used her humour and modern mystique to tell a magical tale or two that literally led us to a surprising finish, she showed us she was impervious to solid steel, pushing it through her own arm in a comical routine of instructions, and she danced with a magical silk that really had a mind of its own! Her act concluded with a stunning ring routine.

Chris North presented an excerpt from his theatre show “The Victorian Conjuror”. A trip back to the magic of Victorian times, fast paced and still as mystifying today. Chris presented vanishes, transpositions, confusing puzzles and a gambling game that you just couldn’t win and finished with a charming tale of a Victorian workhouse and a snowstorm that filled the stage. All very well received by this mixed audience.

Olly Day is a master class in performance and personality. Taking to the stage with song, comedy magic and stories that drawayou in and up the garden path as only Olly can do. A true showman and a fitting climax to a marvellous show.

There was much applause and cheering as the whole cast took to the stage for their final bow, Mike thanked all his friends and led the finale farewell with a very heartfelt song. This really was a fabulous show and although the tag line on the poster said “Definitely the very very last evening with Mike Wallis and friends” I’m sure the stage, and the audience, will call upon Mike again.

All artistes donated their time and all proceeds were given to the St Georges Theatre Trust.