If New York is the Big Apple, is Vegas the Rotten Apple... not as far as magic is concerned. I have just returned from an intensive trip dedicated to the world of 'pick a card' and ' where did that tiger come from?'

First up, (as our cousins say,) was Mac King. Twice a day he shows off his poor taste in suites and hair cuts, to an afternoon cross section of Saga holiday devotees, twicely weds (it's Vegas) and those who have heard. The show is about 60 minutes of fantastic magic and comedy, with lots of audience participation and a performer who really cares about what he is delivering. For those of you ticking them off the show includes cut and restored rope, burned and restored bill, cards across, Sigfried and Roy pastiche, with white tiger and a wonderful disappearing head (Mac's head that is!), but that is really not what the show is about. The show is really a master class in how to convert talent and enthusiasm into a simple show that leaves an audience begging for more. Miss your plane home before you miss this show.

You think the white tigers are beautiful, you have heard about how their show has built Vegas and you still do not know which side of sixty they are, but should you dig deep for the £70 a ticket to see the show. The answer is yes! Although I am not a big enthusiast for illusions, (I think it is a money over matter thing) you cannot fail to be impressed by the 90 minutes of visual wonder presented by the show. Any one who comes along will expect to see tigers, lions and even elephants appearing and disappearing in increasingly jaw dropping and mind blowing fashion. You will not be disappointed, but you will be surprised to see the amazing costumes worn by 50 dancers, the 20-foot high dragon and the sheer showmanship and splendour that encapsulate Seigfried and Roy. The show would run just as long in the West End or on Broadway, as it has in this neon oasis, due not only to the fantastic magic, but the meteoric levels of presentation. Just occasionally you caught slight glimpses of the fact that they had been the performing the show for what felt like a thousand years, but generally the polish shone right to the back row. It is a first class, big production show that happens to be based on magic and you will be showing your friends at home the colour programme for months to come.

If you want more illusions, then the declared most successful afternoon show in Las Vegas history is performed by Rick Thomas at the Tropicana. He too has a liberal sprinkling of tigers (white and gold) and also a nice line in sub trunks, steel cages, doves and attractive assistants. Unfortunately, on the afternoon I saw the show Rick had a couple of technical difficulties which did not combine well with his shiny black trousers and overly scripted patter. The 60 minute show was technically fine, with a good mixture of high quality illusions and audience participation stage effects, but it all had the feeling that it been done twice a day for several years and like your favourite shirt it looked good from a distance but was beginning to fray round the collar and cuffs. 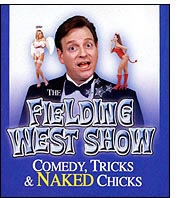 The next show does not start until 10.30 pm, when most people in Vegas are either tired or drunk, but Fielding West, at the Bourbon Street Casino has developed a show to grab the attention of everyone from drunks to nuns. The show is called ' Comedy, Tricks and Naked Chicks', which is a reasonable paraphrase of the sixty minutes but does not do justice to the enthusiasm and talent delivered in the small theatre at the back of the casino. The comedy is constant and original and the tricks include some fun with a dove (including a cannon, his mouth and some toilet paper), bill in orange, disappearing bottle, sub trunk and a comedy levitation that never happens! The 'Naked Chicks' do have a habit of removing their tops, but without night sights you will never know if they were naked or not. Fielding has created a very funny original act, which I would guess is introducing great magic to a new audience who may not normally hand over good money for a standard magic show.

Last came the Master. You have seen the TV specials, heard the slow Kentucky drawl and no doubt read about the theatre, but you will never be fully prepared. Lance Burton is the Master Magician, producing a breath taking traditional magic show in a beautiful theatre, which fully complements his style and obvious respect for the past. Several of the set pieces have been in his TV specials but when you are in the fourth row (lucky me!) that seems to only amplify his technical ability and enhance the overall magical experience. The grand illusions and the expected set pieces (vanishing Corvette, Gramophone, Hangman etc) are all there, but they are superbly complemented by a faultless Miser's Dream, vanishing bird cage (touched by over a dozen children), airborne and the famous opening dove act. The Masked Ball finale is delightfully staged with a succession of productions and illusions and is only upstaged by actually seeing Elvis in Las Vegas. No comments would be complete without the awesome juggling of Michael Goudeau, from giant beanbags to a chain saw, it's 'ticket price alone' stuff! The Greats should be smiling down on the current torch holder because Lance truly is the Master.

These are just a few of the shows currently in the world capitol of illusion and sleight of hand. The overall quality is very high, but reflecting on the experience it is mainly due to the acknowledgment by each magician that they are there to entertain and the point is not the trick itself, but the audience reaction.