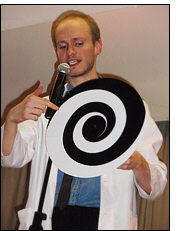 They say “good things come to those who wait” and it was certainly well worth the wait for our “Christmas Party”.

The event had been scheduled to take place on December 1st but we woke that day to heavy snowfalls across the South-East and so took the decision to postpone the party until the end of January in the hope of better weather.

So with the snow all magicked away (I can’t reveal the secret of how we did that), we settled down on Wednesday, January 26th in a slightly less festive but still eagerly anticipatory mood for our cabaret act Oliver Meech.

He styles himself as “The Creative Conjurer” and he lived up to that billing from the off. Oliver takes standard magicians’ fare and conjures up a creative plot or presentation to lift well-known effects from the ordinary to the extraordinary. So no straightforward torn and restored billet but, dressed in a scientist’s white coat, Oliver presented his own take on Einstein’s Theory of Relativity by claiming the world-renowned genius had got the formula wrong!

The overall theme was time travel and Oliver took himself and the audience backwards and forwards in time with clever presentations of such effects as hydrostatic glass, a book test, magic colouring book and Six Card Repeat.

It’s surreal at times but what comes across most strongly is that Oliver is having as much fun presenting this concoction of time-related plots as the audience is of watching to see where he (and they) will go next. A costume change towards the end of the act took that to a new level.

Oliver has the right mix of humour and humility to carry off his style of cabaret act – and it’s never easy performing to an audience comprising a large number of magicians. But he took us all on a delightful journey through time and space which made the sight of snowbound roads a distant memory.

Looking to the future, we have already booked Oliver for a return visit to the club to lecture for us. Since he’s a master of time travel, Oliver already knows that he will get an equally good reception on his next trip to the South Downs Magicians.