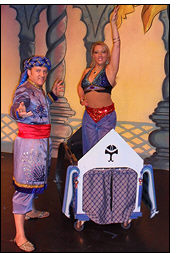 The return of the pre Christmas ice and snow to the North West in early January did not prevent a near capacity house of children (both big and small!) attending the Albert Halls Bolton (Lancashire) on the date I visited to see the pantomime Aladdin. It starred Ken Morley who used to play Reg Holdsworth in Coronation Street, in the role of Widow Twanky. It was a well staged fast moving show with good layouts, excellent vocals, comedy and wait for it Magic! It was for the latter reason I attended to see Andrew Van Buren and Allyson Ford playing the Genie of the Lamp and the Slave of the Ring respectively.

During the performance these two had many on and off appearances with dialogue but their main magic spot came in the cave scene at the point the lamp had been discovered. Andrew entered and fire turned into a Botania as an opener and this made the audience gasp with delight. Then there was the production of Allyson from a Temple Of Life. Next came the Disembodied Princess but this was no ordinary version as once the torso section had vanished the whole cabinet was revolved. I remember Andrew’s father saying to me a long time ago that everything the Van Buren’s built had to be made capable of being presented in a circus ring. Let’s face it you cannot be more angle proof than that!

He followed on with what I would call a hybrid. A levitation with all the hallmarks of a sword suspension but ALL the swords were removed and it certainly had an impact on the audience.

This was a good slot in a well known story which lent itself to a magic act. I feel this type of contribution to a show is good for magic plus (at the time of writing) The Magicians has just started a run on BBC in the prime time slot on a Saturday night. I feel magic has taken a bit of a dip over recent years and perhaps our art is now on the way up again.