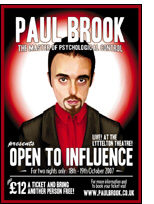 Paul Brook, mind reading psychology abuser and author of On Mephisto's Shoulder, The Brook Test and The Gift, recently put on a one man show in the heart of Birmingham at the Lyttelton Theatre. I was there the first of two nights and took my seat near the front to see how Open to Influence I really was.

The theatre itself was a small amphitheatre hidden away in an old institution in Birmingham's busy centre. The stage was dressed with a small table, a piano piled high with old books and a deep leather chair one might imagine furnishing an eighteenth century gentlemen's club. The intimate atmosphere of the theatre was twisted slightly by strange dark music playing in the background as the audience arrived.

Paul arrived on stage and instantly began to explain his performance: by (ab)using his deep knowledge of psychology he can backwards engineer people's reactions and determine and even control their innermost thoughts. Illustrated with a few simple effects, Paul built the atmosphere, letting the moment serve as an introduction. Picking a large dice up and tossing it into the audience Paul began selecting spectators to assist in the performance proper.

The show featured many of what we know as classics, but as anyone who is familiar with Paul's work can surely imagine, each one was given it's own unique spin and locked into Paul's premise. Coming as I do from the other side of the fence, I was intrigued by Paul's presentation, as his obvious genuine understanding of human psychology was mixed with the artifice of his presentation leading me to wonder periodically, is that true? Is that research real, or did he make it up? I was beginning to believe one of his in depth references to a US based psychological research project when he stated the study's head was a professor Phill Smith... hmmm. Maybe that bit's not so real...

The effects were clever, nicely presented and well structured, and the audience reacted well to Paul's presentation. Like me I think they were left guessing how much was the real deal, and there was plenty in there that I was unable to explain. Paul's style is quite dry and carefully paced, punctuated by pin pricks of mischief and levity, self analysing asides and quirky in-jokes, and the audience were clearly enjoying themselves. The work Paul had put into the show was evident, and the smoothness with which it ran was exemplary.

Unfortunately, to my deep dismay, I had to leave before the show was complete, for which I offer my regret and apologies to Paul. I snuck away before the final effect in order to catch the last train back to Leicester, my excuse being that I had to be up at five in the morning the next day to travel to a job. Sorry Paul! I wish I had been able to see the denouement of the show, I'm sure it was, like the rest of it, excellent.

So hats off to Paul, Open to Influence was a very enjoyable and thought provoking evening out, and I curse Midland Mainline for robbing me of the opportunity to see the end and to have a decent chinwag with its star in the bar after the curtain fell.