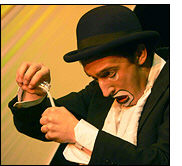 You may think me biased, as Paul used to work for us, but this was a simply terrific show. The rest of the sell-out audience, however, wasn’t liable to be biased and its reaction was the same as mine: this was a simply terrific show from a very talented young performer. Here we have a 21 year old presenting a two hour stand up show of magical comedy. Who else was on the show? No one. This was Paul and Paul alone, and I venture to say that there are not many magicians capable of holding an audience spellbound for two hours, let alone magicians in their early twenties.

In 2003, Paul won the Magic Circle’s Young Magician of the Year title. In 2006, he won the British Shield at the IBM in Eastbourne. So this is not your average youngster. What’s he been doing since? He’s been cruising (in the polite sense) usually with the Holland America Line, touring the world and learning his craft – and it shows, for here is someone who has learned pace, timing and stage presence. It’s been said before that you can turn an actor into a magician, but it’s a lot harder to turn a magician into an actor. You either have that presence or you don’t. And Paul Dabek has.

If you’d been in the audience, you’d have seen a streamlined Torn and Restored Newspaper, a very good sucker Dye Tube routine, Aerial Fishing, Professor’s Nightmare – and this got gasps from those around me, as did the previous trick, Tossed Out Deck, Pom Pom Prayer Stick, Thumb Tie with pipe cleaners (it’s quick and doesn’t depend on a lot of faffy tying – just twist ‘em and you’re done), Borrowed Banknote Disappears and Eventually Re-Appears (and I mean ‘eventually’ as this was a very funny and extended routine with a jewel of a spectator), Tim Ellis’ Soda Can Resurrection (more gasps), and finally, a beautifully crafted Gypsy Thread, with a spotlight on Paul and a church candle in front of him. The thread was burnt into short segments, slowly, and magically restored, then a sudden flash of fire, instant darkness and the lights came up.

And that was just the first half. I didn’t even mention the Shadow Act, presenting the Circle of Life from The Lion King which brought prolonged applause.

So where do you go from there? Well the answer was another speciality routine. The second half opened with a huge musical box slowly winding down. Out stepped a Chaplin-esque figure who clowned and played with the audience’s emotions before finally – in a very literal way – the smile is wiped off his face. Clowns tread a fine line between slapstick and pathos and this was caught beautifully in this routine. Straight into Growing Head, Confabulation (how many gasps are you allowed in one show?) the Egg Beater Mind Reading Card Trick (no, I can’t think of the proper title, but Billy McComb made a feature of this) Wayne Dobson’s The Kid’s A Magician (we, Practical Magic, used to put this out, and what a great routine it is), balloon modelling (very funny), Scott Alexander’s Shattered – the trick where you’re quite likely to skewer your hand on a broken bottle, but you don’t, though the audience think you will and sit shivering at the prospect – a very fast Linking Rings, and an applause-winning finale of Snowstorm.

Just a collection of tricks? No. Ask the audience who were there and they’ll tell you that live magical entertainment is hard to beat. They gasped and laughed and applauded and were entertained. For two hours.

I’ll finish with a couple of questions. Is Paul Dabek good? Did the audience think he was good? Go back and read the first paragraph.