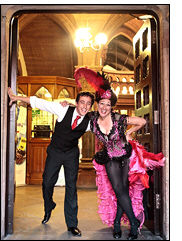 It was standing room only at Paul Dabek and Romany’s Magic Show at the Chester Vaudeville Festival. Billed as a family friendly event it was clearly a hugely popular attraction in the Festival line-up of variety, risque comedy and Burlesque entertainment.

But this was no “magic for the kiddies” affair. There was no old-fashioned condescension to the families, no patronising the children in the audience. Instead all ages were carried along by the illusion, sleight-of-hand, and comedy spectacle of classic conjuring presented by two experienced magicians with great, but different personalities. Paul and Romany presented strong magic, skilfully performed with plenty of variety and surprises, straight from their individual repertoires.

It’s sometimes suggested that shows should have a powerful, colourful and flash opening, and Paul’s silent act to music was just that. Immaculately attired in a black frock coat, which fitted perfectly with the style of the festival, he thrilled and entranced the audience with his act. It really is a whirlwind of magic and manipulation. The audience were astonished at his bouncing and skimming cards and oohed at the colourful silk fountain to streamer effect.

All this presented on a stage with an alarming rake in Chester’s magnificent, gothic style, Victorian Town Hall.

With a change of pace Paul intrigued and amused with his comedy patter routines, performed centre stage in a spotlight and included Torn and Restored Newspaper, Thumb Tie with pipe cleaners and Pavel’s Walking Knot all shown with practiced flair and panache. Paul enlisted the help of a youngster from the audience to assist in Aerial Fishing. The boy’s face told the story! I knew, even from the back of the hall, that it was a real goldfish swimming in the brandy goblet he was holding.

If Paul had dazzled with his opening act and intrigued with his comedy patter presentations then Romany added glamour and show biz sparkle, clearly demonstrating why she has won so many prestigious awards – British Ring Shield, The Magic Circle Stage Magician of the Year and Lion’s Head People’s Choice Award in Las Vegas.

For her opening number Romany segued through her silent cabaret act presented in burlesque showgirl style with Cut and Restored Streamer, Linking Rings and more, all punctuated with the surprise appearances of, increasingly larger, shining, silver bird cages.

It is clear that Romany’s early dance school training is one of the influences on her style. And she confirmed this in a talk, held in an intimate deli earlier in the day. During An Audience with Romany, she responded to questions and showed some excellent close-up magic including Gipsy Thread. She credited Eugene Burger as inspiration for her routine, and received gasps of amazement and applause as she unravelled the restored thread in the rising smoke of the extinguished candle. The Town Hall audience had the same reaction as Romany presented her cameo version of the classic effect with an large stage size candle stand.

I and the entire audience loved Romany’s handling of her audience volunteers, There was a delightful moment when Romany was primed to invite ninety-year-old, Gladys on stage to celebrate her birthday by receiving a Wizard’s Hat fashioned out of torn tissues. But it is her rapport with and comedic manipulation of her male assistants that is outstanding. Having enlisted two men to help her, she vamped and swooned through a Coins Across trick and then inveigled them into tying her into the Gypsy Rope Spirit Tie trick.

Having literally hopped off the stage to tremendous applause the show moved to the closing act.

Shadowgraphy is an old, traditional act, not seen that often. Paul’s interpretation has brought it up-to-date with a great, and apt, music track from the Lion King. At about four minutes long it’s fast-moving and slickly presented, and full of humour. By their audible reaction it was an audience winner, adults appreciated the skill, some of the kids, I noticed, attempted to emulate Paul’s shadow characters with their hands on the way out – none could match the deftness and speed of Paul’s fingers, hands, arms and head for all are utilised in his artistic production of shadow mammals and birds. Some preened, some fed, and there was even a flash of rumpy-pumpy! Well, they were rabbits! It was a super finale to a great show.