An Audience with Paul Daniels & The Magic Of Max Malini

At The Edinburgh Fringe Festival 2003 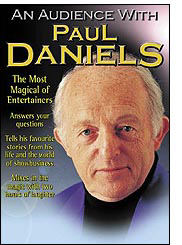 Paul Daniels Does The Fringe

The Edinburgh Fringe Festival is a place where you would expect to see alternative comics, avant-garde theatre and the outrageous - this year you will find an alternative in Paul Daniels. Presenting two shows, Paul brings experience and pure showmanship to the Festival.

The setting, a church (St. Cuthbert's), set in beautiful Gardens. His two shows within the church are totally different and bring out the best in this seasoned performer.

An Audience with Paul Daniels at just over one hour forty minutes long and is just that. Sat in church pews the audience take the chance to ask Paul questions on any subject which he answers openly and honestly, into which he weaves years of experience and much magic.

The show is organic. Having seen it and talked to other audiences it changes dependant on what the audience want. The night I saw the show, questions were asked and answered on subjects ranging from Spiritualism to The Masked Magician, from his favourite magicians to why he was at the Fringe.

This was a lesson in the art of showmanship. He introduced the audience to the characters of Ken Brooke, The Fox Sisters and Doug Henning, he talked of ethics and the history of magic and about licensing effects and P.T.Selbit.

Interwoven into this was the magic, this included classics like Six Card Repeat, Chop Cup, Electric Chairs and Linking Rings, as well as one of the most impressive displays I have ever seen of 'captivating an audience' for seven minutes using one elastic band! A simple juggling feat or bar stunt but full of gags and engaging the audience totally. A master class in presentation.

Daniels also levitated from an old cardboard box which was well received, interwoven into his view on ethics and a story of how he came to find out about the illusion.

He closed the show with a bank note being returned to a spectator from within a walnut, which was inside an egg, which was itself inside a lemon. The audience loved it, he received an ovation and many happy people left the church.

If you want to learn about entertaining and the history of magic then make sure you get to see An Audience with Paul Daniels, I also believe he will be doing a theatre tour with the show soon.

After this show it was a dash up two flights of stairs to a smaller room with cabaret tables and seats for:

The Magic Of Max Malini

This show is all about Max Malini, his magic and his style. The audience was small, numbering about thirty five, but ideal for the venue. It felt like a magic club night for the public, they were drawn into the era of Malini and his character. This was due to Daniels' performance; it was full of respect and love for the character and style of Malini and his passion for magic.

The show involved many classics of Malini from the Egg Bag presented at a lovely soft rhythmical pace, to his blindfolded card stab, to a tabletop production of a block of ice from his hat. Daniels also introduced the audience to effects that Malini invented that perhaps the magic world doesn't give him credit for like "Chink A Chink."

Peppered throughout the show were bar stunts and bets, this was "Malini the Hustler" the man whose force of personality made you believe him. He was a true publicist of his day, making himself famous without doing theatres and big touring shows - this came across strongly through out the show.

Into this Paul Daniels wove archive material from the collection of Ben Robinson, New York. This show offers an insight into the magic of a true showman, Max Malini.

The audience of lay people loved the show as did I. If you haven't seen it yet try to. It is enjoyable, informative and entertaining.

Daniels is no spring chicken - yet he made the evening flow seamlessly. Many younger pros would not have been able to keep the pace up, and the laughs and tricks flowing. Daniels did. These shows will teach any performer something about what it is to be a true entertainer.