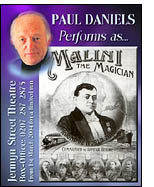 It is easy sometimes to forget the sheer impact of simple tricks on a lay audience; and this was certainly brought home in force by Paul Daniels with his tribute to Max Malini. Whatever the minimalist production values of this show, it was more than made up for in the sheer volume of tricks on display. All the classic Malini repertoire were there, including an excellent Card Stab, Egg Bag, Bill in Lemon, Glass through Table, Matrix with sugar lumps and the impossible production under the Hat that was said to have caught Dai Vernon so badly; and probably a dozen more tricks besides. In between Daniels told us something about Malini’s career, demonstrated that he had clearly done quite a bit of new research, related a few of the well known anecdotes – and, yes, the one about ‘tell them that Malini did it’ was in there – and even impersonated his accent.

At the end of the day, though, this show is essentially a vehicle for Paul Daniels’ charismatic personality. And what came over was Daniels’ completely relaxed and confident approach, his eminent enjoyment of performing essentially close-up magic and the familiar repartee that we have come to expect from his many years of performing on stage and television. This was particularly so in his Malini tribute to the Bunco Booth where he conned several of the audience out of £1 coins in rapid succession – great entertainment.

The show, including a 15 minute interval, runs around two hours; and is an expanded version of the one he performed at the Edinburgh Festival last year. The lay audience were clearly delighted by the experience, with gasps and spontaneous applause punctuating the evening. The night I was in the audience members included David Mellor and the DJ Kid Jensen. So a bout of celebrity spotting may take your mind off the rather high ticket price.

All tickets £57 each. MagicWeek readers can obtain 2 tickets for the price of 1 by phoning the box office on 020 7287 2875 and quoting the "Paul Daniels 2 for 1 Internet Offer" The show is on Thursday, Friday and Saturday night and runs through to March 20th.