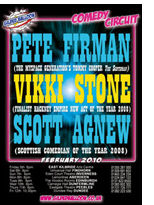 My wife (who hates magic) and I got some tickets to go and see Pete Firman & The Gilded Balloon Comedy Tour at the Eden Court Theatre in Inverness, Scotland on the 7th of February. I think I caught my wife in an off moment when she found herself agreeing to go with me to a magic show of all things.

15 minutes after Pete came on I looked over at my wife only to see her convulsing in hysterics and taking off her glasses to wipe away tears of laughter. This was a magic show and she was having a great time. I had a feeling this was going to be an interesting evening.

45+ minutes of magic and comedy was what the “demon imp”, Pete Firman, gave the Highland audience and every minute was appreciated. Sometimes crude (ish) but always funny, Pete's stage persona was maniacal yet restrained. His magic was not dissimilar to Tommy Cooper's performed by Eric Morcombe with attention deficit syndrome. He seemed to suspect what a lot of audience members think of magicians and used it to great effect. When you thought he was about to fool you with a classic magic trick, he was simply on his way to mess with you head and make you howl with laughter. Cheap gags? Yup. Funny gags well place and immaculately timed? Yup. Pete manages to lead the knowledgeable magician down the garden path of "Oh he's going to do the old...Nope... he just threw it away for a big laugh!" What a refreshing change. It is very, very impressive to watch a performer who is a physical clown, a verbal gunslinger, a little bit scary, psychotically frantic, occasionally insulting and TOTALLY charming to everyone of every age.

His magic tricks were slick and tight. I knew one of the assistants he brought up on stage to help with his hysterical egg bag routine and after the show she kept asking me how he did it because it was just “too impossible”! Despite the tricks he performed being perfectly mystifying they NEVER got in the way of the comedy.

Those of you in Scotland get to your local (or distant) venue to see him in the Gilded Balloon Comedy Tour if you can. Beyond this you should make the effort to find him, heck, BOOK him if you have to and enjoy the likelihood that this is one magical performer that simply refuses to take his medication… thank goodness! www.petefirman.co.uk