May 2007
Review by John Derris 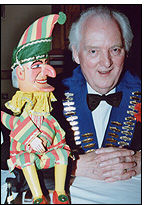 Giant of the entertainment business — Signor Punchinello — recently hosted a dinner for the incumbent British Ring IBM President John Styles MBE and his wife Barbara at Brands Hatch in Kent. Multi-talented lifetime entertainer, Punch and Judy professor, magician, ventriloquist, comedian, character actor and film consultant to the stars, John Styles ensured the evening was devoid of stuffy formality and full of fun and diversity so typical of this well-known celebrity. 140 guests joined in many show biz dinner table traditions, waving serviettes in the air and banging wine glasses to the tune of “The Bells of St. Marys” and he even presented every guest with a tube of Punch and Judy toothpaste! It was that kind of an evening.

Friends in the entertainment world, clubs, associations and magic including the IBM, The Magic Circle and many other societies, travelled from all parts of Britain to join in this unique evening for a unique performer. Taped greetings were received from many show business friends including Roy Hudd, Harry Hill, Barry Cryer, Joe Pasquale, Paul Daniels and Debbie, Robert Lindsay and many others and top close-up magicians performed at every table to be followed by a sparkling cabaret full of variety.

With music for the evening provided by the Bruce Graham Trio, John Styles enlisted his many talents as compere with a barrage of off the cuff one liners and magic signature pieces introducing a cavalcade of variety. A stunning non-music tap act, three boys under the name Solid Feet, award winning young magician Jonathan Shotton, ukulele funster Mark Walsh, long time friend and leading ventriloquist John Bouchier, closing with Martyn James and Company with a programme of show-stopping illusions. It was a great evening succinctly summed up by the chief host with his comment “That’s the way to do it!”