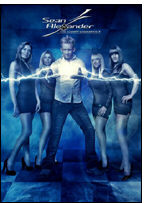 I have known Sean since he first started in magic and have watched him develop over the years into what I now see as a true master of illusion. His show at Pleasurewood Hills is simply sensational with all the ingredients that appeal to all ages and keep them on the edge of their seats. The show opens with an exciting mix of sound, light and video that suitably builds the anticipation for what is to come.

I don’t intend to describe every illusion you will see as it will spoil the surprise element but it suffices to say from Sean’s signature piece opening illusion to the spectacular and amazing last illusion, the show is fast moving and exciting and you will see over a dozen illusions that you rarely get the opportunity to see individually let alone all in one show!

The music, lights and tempo of the show is breathtaking with Sean ably assisted by the Magic Angels and if you have any interest in magic you should not miss this show.

The show runs until 4th November 2012 - exact opening times and dates can be found at www.pleasurewoodhills.com.