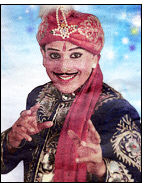 At one point during his show – one of the few times he speaks English – PC Sorcar Junior says his way of doing illusions is “better than the American way.” Some would possibly dispute the word “better” but it is undoubtedly different. The biggest touring illusion show I had previously seen was David Copperfield’s and comparisons between the two are inevitable: particularly as Sorcar’s final illusion is his ‘homemade’ version of the Death Saw.

Many of the illusions do have a Western influence (for instance, a not terribly convincing Interlude performed by Sorcar’s daughter and a swiftly executed Slicer) but many of them are clearly steeped in Indian culture. The extremely pacey presentations (helped by having as many as five or six assistants per illusion), the colourful costumes (brought to great effect with a three way dress transformation of four girls behind a giant cloth) and the Eastern music and dancing, all play their part. A couple of the illusions, too, I’ve never seen before – and suspect they might have originated in Sorcar’s homeland.

What perhaps Sorcar’s show lacks at the cutting edge of modern day illusions, it more than makes up with charm. His running gag of ‘Waters from India’ with the lota vase is something that Copperfield couldn’t possibly pull off. His solo talking piece, X-ray eyes, is a masterful routine, both in the effect and gentle banter with his helpers, that Copperfield would require stooges to pull off. And bringing on his myriad of assistants at the end for a (song and dance) curtain call is something that Copperfield is apparently incapable of pulling off.

There is a clever parody presently showing on YouTube of the Mac versus PC advert. It features Mac (King) and David Kaye playing PC (Sorcar Junior). The ‘joke’ is that Mac King can do with a pack of cards and a goldfish what Sorcar requires a truckload of illusions and assistants to achieve. The truth is, though, that the two magicians are like chalk and cheese. Maybe a show like Sorcar’s couldn’t survive in Las Vegas – but what a delight to know that it can still flourish in certain parts of the world: and what a pleasure it was to see it in its full glory in the UK.