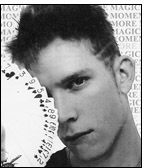 This morning (Monday 22nd August!) I am shattered!!! I went to support 17 year old James More last night at the Bournemouth Star Trail . I first met James when he was about 13 years of age and soon discovered that he was absolutely passionate about magic (this very much comes through in his performance). I am very proud to have played a small part in his development, teaching him front and back palm card productions, and Dancing Cane etc.

A couple of years ago, I went to support him in a Talent Show at Weymouth Pavilion. He was really good even then, at the tender age of just 14! The first half of the show was ALL SINGERS, and then on came James, A BREATH OF FRESH AIR! at last something different! He recieved a great ovation from the audience and I thought he would get through to the next stage, but unfortunately it was not to be. Recognising his obvious potential, I booked him as a "Special Guest" in my own "Could It Be Magic!" show at the Barrington Theatre in Bournemouth. He enchanted the audience and recieved a tremendous reception from them. I saw in him an incredible talent.

Recently he got through to the finals of the YOUNG MAGICIAN OF THE YEAR competition In London, in my opinion (and the opinion of many others) he SHOULD have been placed in the final three, yet again it was not to be! Apart from the winner the judges seemed (overall) to favour comedy over magic.

Last night however at the Star Trail, Justice was served. James caused a SENSATION with a mainly "Lay Audience" but competition was also FANTASTIC. Yet again I would have hated to be one of the judges!!! A STUNNING girl singer was a winner in my eyes, she had STUNNING looks (does modeling as a day job!) had a GREAT voice, moved well, FAULTLESS! she could easily have won, and I thought she might. Then there was a guy I recognised from the check out at ASDA! he sang three songs, each from West End musicals, WOW! WHAT A VOICE!!!!! he sang/acted the songs as if he WAS IN THE WEST END SHOW!!! I was nearly in floods by the time he got to a song from Miss Saigon, he was SPECTACULAR!!!! and DESERVES to be playing the lead in a West End (or any other end! musical). Then there was a 16 year old girl singer, who was, well what can I say? for her age such a strong & mature voice, INCREDIBLE! she had a fantastic chance of winning also in my opinion. One other girl singer had it all as well! The others (9) altogether were all very very good, but these four mentioned were going to be very strong competition for James, and bearing in mind, that speciality acts HARDLY EVER WIN, (it's nearly always singers) I wasn't sure as to the outcome. I just hoped and prayed that he would at least get through to the semi final THIS THURSDAY.

James was fantastic! mostly the act that he did at the Y. M. O. T. Y. competition, with just a few changes (unlike his Magic Circle act which he almost completely changed only WEEKS BEFORE!!) a couple of "Blips" where the first match (from under the lapel) didn't light, the second one likewise, then he just shrugged and went to his pocket & pulled out a lighter! (I told him ages ago to have a back up, and put a lighter in his pocket!!!) he wasn't put of by it at all, just carried on!!! (very professional!) The audience response (and it wasn't just his friends in the audience) were cheering/gasping at all the incredible magic and INCREDIBLE SKILL on display. I can honestly say that I have NEVER heard such an INCREDIBLE response to a magic act from lay people It was really FANTASTIC!!

After he finished, the compere came back out, to bring him off, and told him that an agent in the audience wanted to offer him some cruise work!!!!!. So "At least he's got something out of it even if he doesn't get placed" I thought.


I really thought he would get placed but you never know at these competitions. Even in Miss World competitions etc I'd get it wrong, (either that or the Judges get it wrong!) The prettiest girl doesn't always win, the most talented acts don't always get on etc..

Surely he would at least be placed into the semi final though? SURELY.....

Bearing in mind that in my opinion, (and the opinion of others) he should have been at least in the top 3 at the Y. M. O. T. Y. could it all go wrong for him again?

(I'm good at building this up aren't I?)

The audience had a chance to vote, for their choice, but this had no bearing on the JUDGES DECISION, it was the judges that truly counted and then guess what happened?

The Compere comes back on, and says that because the scoring is Soooo (!) CLOSE, they are going to have a recount!!!!! (whoops! MORE DRAMA!!!!)

Then comes the announcement, "In JOINT(!) THIRD PLACE was the girl singer that I thought was very very good, alongside another girl singer, the stunning model in the long white dress! (who I really thought COULD win outright, she had EVERYTHING!!!).

James's main (in my opinion) competition were now out of the way, if he didn't get placed at all I was going to be devastated, like I was in London.

The Compere announces: "and in FIRST place is act number 6 JAMES MORE!!!!!!!!!! (I'm in floods now as I type this and "Relive the moment!!") HE WON!!!!!!!!! Despite very stiff competition from many other BRILLIANT acts OUR JAMES WON! Justice at last for JAMES!

He came back and did a bit of an interview, and said that one day he hoped to work in Vegas, Someone in the audience shouted out in a loud voice "You will James, you will!"


That someone was ME! and I believe he will. I'm so very proud of him, so pleased that it was I who first taught him how to back palm a card!! So pleased that last night he got what he truly deserved.
WELL DONE JAMES!

Today is now (as I type this) Friday, the Semi Final was last night. Out of 14 very worthy acts (not a "Duff" one amongst them!) James was voted OUTRIGHT WINNER by both the audience vote and the Judges vote! (incidentally it's TWICE now that he has recieved the top audience vote as well as the judges.) James now goes through to the final on SUNDAY 28th August. If you read this in time, then I URGE YOU to come and support James in the final. Come and see first hand what REAL MAGIC IS ALL ABOUT:

SKILL! PRESENTATION! CHARISMA! ORIGINALITY! MISDIRECTION! and INCREDIBLE MAGIC!
One thing's for sure you'll be seeing more of James More!

SUNDAY 28TH AUGUST
WESSEX HOTEL
WESTCLIFF
BOURNEMOUTH
SHOW STARTS AT 8PM
(Get there early, it'll be a sell out!!)

BE THERE!
James will also be appearing at the Pavilion Theatre in Bournemouth on the 30th Sept 05 in a show entitled: "A Night With The Stars Of The Future" Booking details Tel: (01202) 451700.