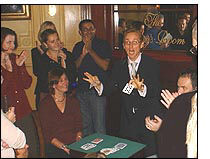 Steve Cohen's opening routine impressed. Not so much because it was good magic (which it was) but because it involved a number of members of the audience and instantly broke down any potential "I'm a wise-guy magician" barriers. Clearly Steve Cohen knew how to work an audience - they warmed to him from the very start and remained under his spell throughout.

The room layout was perfect for an intimate show, with three rows of chairs laid out in a semi-circle around an elegant table. I would have liked to have seen a little more light thrown on the actual performing area though. Despite the formal surroundings Cohen's style is actually very informal, using rapid-fire banter one moment and clear controlled lines the next. The show has great pace and never lags for a single moment which is no mean feat for a 70 minute solo performer.

The audience were invited to participate in a lot of the routines, sometimes even leaving their seats to come up really close and witness the magic from just a few inches. And there is great variety in the material itself although magicians will recognise many effects this show is, of course, aimed at the layman. Cohen has an infectious charm, with flashes of Woody Allen now and then, and looking around the room it was good to see so many people with a smile on their faces. (Behind the fun lies a tremendous amount of work - shows of this caliber don't simply fall together.)

Cohen's audience were enthralled by both the man and his magic, with many an audible gasp. Highly recommended - do not miss it!

Steve Cohen is at The Langham Hilton, Regent Street (upper), London from October 2nd to the 19th, Wednesday to Saturday nights inclusive, two shows per night: 8pm and 10pm. Tickets are £40 per head and seating is limited so reservations are essential - telephone 020 7636 1000 (mention MagicWeek and you'll receive a £15 discount - tell them that you are a magician when you make the booking to confirm your discount).